It appears that oil prices are settling into a broad trading range between $125 and $95 per barrel. 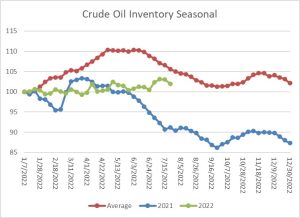 The above chart shows the seasonal pattern for crude oil inventories.  Clearly, this year is deviating from the normal path of commercial inventory levels.  Although it is rarely mentioned, the fact that we are not seeing the usual seasonal decline is a bearish factor for oil prices.

With so many crosscurrents in the oil markets, we are beginning to see some degree of normalization.  The inventory/EUR model suggests oil prices should be around $65 per barrel, so we are seeing about $30 of risk premium in the market.

Last week, we noted that gasoline demand was weakening and that has been putting pressure on oil prices.  This week, we take a look at the number of licensed drivers in the U.S. 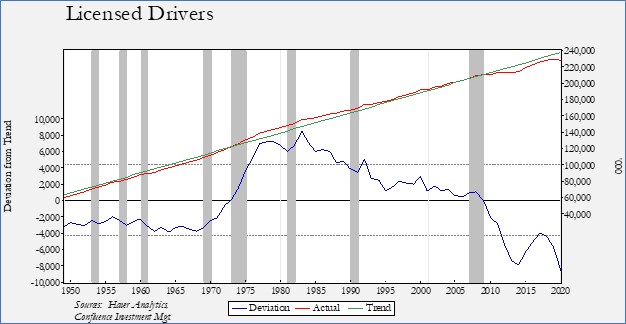 In observing the above chart, it again begs the question, “Why would anyone build additional refinery capacity if the number of drivers is falling below trend?”