The above chart shows the annual seasonal pattern for crude oil inventories.  This week’s decline was typical, but we are about to embark on a period of rapid seasonal increases.  If we follow the seasonal pattern, inventories will rise about 10% into mid-April.  That situation should be factored into the current price but the anticipated rise in stockpiles isn’t a positive for the market.

The DOE has released its Short-Term Energy Outlook.  For the most part, the government is looking for mostly steady prices this year.  The most uncertain element of their forecast is U.S. production.  Their forecast calls for 11.0 mbpd; we have doubts that this level will be achieved due to environmental/policy issues we discuss below.

One energy theme we are watching with great interest is the divergence between the price of energy commodities and their underlying equities. 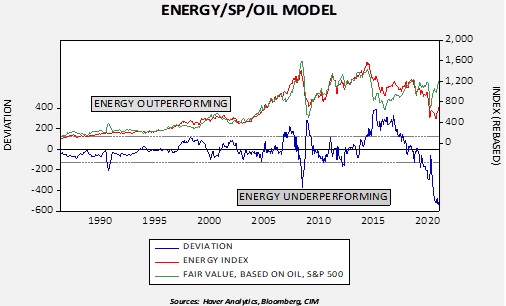 This chart shows a model of the S&P Energy Sector Index relative to WTI and the S&P 500.  For the past 18 months, energy equities have underperformed relative to not just overall equity values but to oil prices as well.  Although the index has shown signs of recovery, note that it is still not outperforming overall equities and oil prices.

It is normal for the underlying equities to exhibit at least some degree of sensitivity to commodity prices.  Changes in commodity prices send signals to companies in the industry; for example, rising prices let producers know that conditions are favorable to increase output.  Obviously, falling prices indicate the opposite.  However, the decision to change production levels is affected by more than just the price of the commodity.  It is also affected by interest rates, regulation, the availability of capital, infrastructure, and expectations of the future.  To some extent, the last item may be the most important.  If companies see a rise in prices as being mostly temporary, they may not react.

As the “greening” of America proceeds, it is sending signals to fossil fuel energy producers and the industries that support oil and gas production.  The future isn’t rosy; transportation electrification and environmental regulations suggest future demand will likely be less than what it would have been otherwise.  Therefore, oil and gas companies are already in the process of adjusting to this changing market environment.  Here are some of the items we noted this week:

The bottom line is that we are likely to see supply constrained in the future due to environmental regulation and changes in investing time horizons.  A similar path is emerging to what coal has seen over the past 15 years.  What this means in the short run is that we are likely to see a disconnect between oil and gas equities and the price of the underlying commodity, which favors the latter.  In other words, as economic recovery takes hold and demand improves, supply will be constrained by the factors noted above.  If our analysis is correct, this means the prices on oil and gas will rise much higher to generate a supply response.  But, in the end, the investing thesis is that owning the commodity will likely prove to be a better path than owning the associated companies.

On the alternative energy front, we are starting to see utilities invest in large-scale battery projects.  Utilities are building battery storage to solve the problem that alternative energy creates—what do you do when the sun doesn’t shine, or the wind doesn’t blow?  California is the home of a couple of large projects.

In geopolitics, the controversial Nord Stream 2 pipeline appears closer to completion.  The U.S opposes this project and will likely try to use additional sanctions to prevent it from opening.  The blockade on Qatar was recently lifted by Saudi Arabia.  Interestingly enough, Qatar has indicated that it won’t change its relations with Iran.  Qatar’s Iranian ties were one of the factors behind the decision to deploy the blockade.