Crude oil prices are trying to base but so far have failed to break above resistance at around $80 per barrel.

Crude oil inventories rose 8.4 mb compared to a 2.0 mb draw forecast.  The SPR was unchanged, the first time since the reporting week of May 20, 2022.  The unusually large build was caused by slower than expected recovery in refinery operations.

In the details, U.S. crude oil production was unchanged at 12.2 mbpd.  Exports rose 1.7 mbpd, while imports rose 0.5 mbpd.  Refining activity rose 1.2% to 85.3% of capacity.  The Christmas cold snap closed in a significant level of refining activity, and the industry is slowly recovering.

The above chart shows the seasonal pattern for crude oil inventories.  Last week’s jump in inventory means we are starting the year off with well above average inventory injections.  The chart does show that the usual seasonal pattern was not followed last year.  This is because the average still reflects the restrictions on U.S. oil exports whereas there isn’t much of a discernable pattern to this data now that exports are allowed. 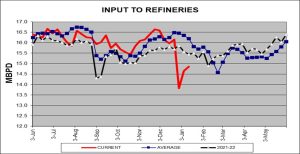 Since the SPR is being used, to some extent, as a buffer stock, we have constructed oil inventory charts incorporating both the SPR and commercial inventories.  For the next few months, we expect the SPR level to remain steady, so changes in total stockpiles will be driven solely by commercial adjustments.