Oil prices briefly moved above $100 per barrel on news of the Russian invasion of Ukraine.

In the details, U.S. crude oil production was unchanged at 11.6 mbpd.  Exports rose 0.4 mbpd while imports increased 1.0 mbpd.  Refining activity rose 2.1%, recovering from the previous week’s decline tied to the cold snap that adversely affected refining in Texas and Louisiana. 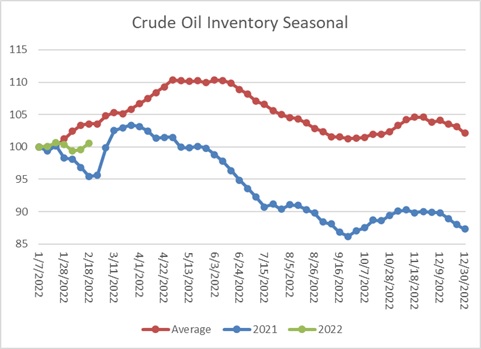 This chart shows the seasonal pattern for crude oil inventories.  This week’s report shows we are “splitting the difference” between last year’s plunge and the usual rise seen in the 5-year average.  Under normal circumstances, we would anticipate a steady rise in stockpiles, but under current conditions, normal patterns may not develop this year.

Based on our oil inventory/price model, fair value is $69.56; using the euro/price model, fair value is $54.54.  The combined model, a broader analysis of the oil price, generates a fair value of $62.62.  Current prices are being driven by ESG and geopolitics, so the usual impact of inventory and the dollar has been overwhelmed.  However, the analysis shows that any sort of normalization will likely lead to lower oil prices. 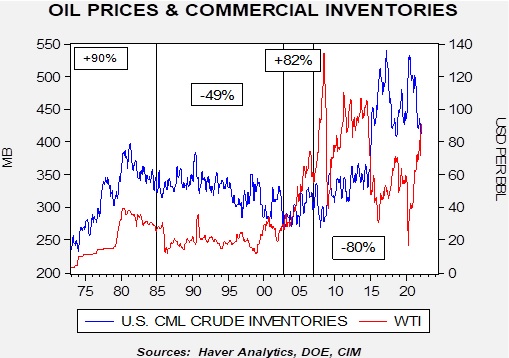 The normal relationship between inventory and price is inverse.  In general, rising inventories suggest excess supply, so rising stockpiles are usually bearish.  However, as the above chart shows, there are periods where the two series are positively correlated.  During the geopolitical turbulence of the 1970s into the early 1980s, U.S. commercial crude stocks and prices were positively correlated.  Another word for this condition is “hoarding.”  In other words, rising inventories indicate increasing demand.  Since 2007, inventories and prices have been inversely correlated; we will be watching closely to see if this correlation “flips.”  If it does, it would be considered very bullish for crude oil prices.