Here is an updated crude oil price chart.  Positive news on a vaccine for COVID-19 led to a strong rally this week, taking prices to the upper end of the current trading range.

Commercial crude oil inventories fell 0.7 mb when a 1.7 mb draw was expected.  The SPR was unchanged; there is still 3.2 mb of storage in excess of the 635.0 mb that existed before the pandemic.

The above chart shows the annual seasonal pattern for crude oil inventories.  This week’s data showed crude oil stockpiles were steady, which is somewhat contraseasonal.  Inventories are past their second seasonal peak and usually decline into year’s end. 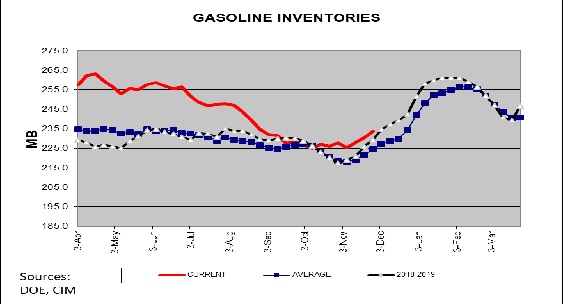 At the time of this writing, OPEC+ had not reached a decision; talks are continuing.  The UAE has expanded its production capacity and would like to boost output.  Iraq, which needs the revenue, would like to as well.  Libyan production is recovering, adding to global supplies. 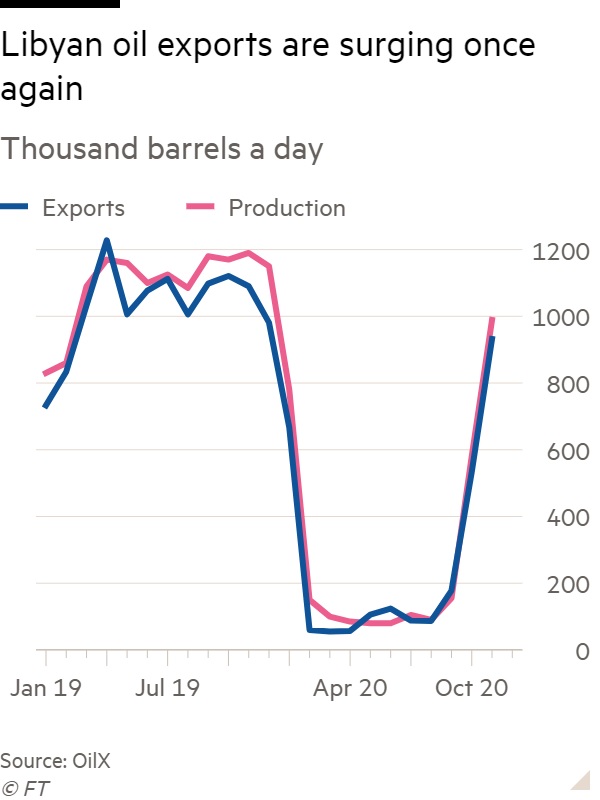 But the biggest problem facing OPEC+, and to some extent, all oil producers, is the issue of peak demand.  If actions taken to manage climate change lead to less oil consumption, then oil reserve owners face the problem of stranded assets.  If demand and prices are set to decline on a secular basis, then there is an incentive to produce now as the value of future oil will likely be less.  It is important to remember that the reason for the collapse in oil prices in April was due, in part, to a market share war within OPEC+.  Although it is difficult to parse out all the factors that played a role in the Saudis backing away from their policy of lifting market share (and, consequently, pushing down oil prices), there is a strong case to be made that President Trump’s intervention played a role.  With Trump set to leave the White House next month and President-elect Biden’s policy of reducing carbon, the Saudis may be more inclined to return to their earlier policy.  So far, Riyadh is holding the line on production cuts.  But, if frictions rise high enough, Saudi Arabia may decide to restore discipline.  We do find it interesting that, just a few short months from negative prices, the cartel is getting antsy to boost output.  If OPEC+ fails to maintain production cuts, the U.S. energy industry, still struggling, will see further production declines.

In other oil and gas international news:

Hydrogen is getting a lot of press lately.  Japan and Australia are working on a project where the latter supplies the former with the gas from coal.  South Korea and China are also working on projects.  There are reports that salt mines are being prepared to inventory to product.  Even pundits are getting involved.

A massive solar project is being planned in Texas, the largest in the U.S.  Of course, with solar and wind, battery storage remains an issue.  Batteries are seeing new investment as well.  And, there is new research in recycling oil EV batteries, which may further increase storage capacity.  The commitment to EV by car companies appears to be increasing; General Motors (GM, USD,  44.68) has decided to exit the lawsuit it had joined against California over emissions standards.

Although propane fundamentals do not suggest a supply problem, a rise in outdoor dining has led to restaurants firing up portable heaters, which is leading to localized shortages.

Finally, the CFTC did not blame anyone for the oil price declining into negative territory in April.  We suspect that passive investment played a major role in the decline, but government regulators were unable to make a determination.  It is possible this decision could be revisited under the new administration.