Crude oil inventories fell more than anticipated, declining 7.4 mb compared to forecasts of a 3.5 mb decline.  The SPR was unchanged this week. 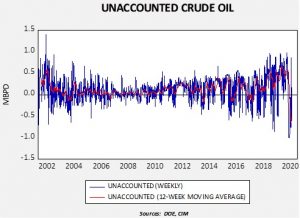 Unaccounted-for crude oil is a balancing item in the weekly energy balance sheet.  To make the data balance, this line item is a plug figure, but that doesn’t mean it doesn’t matter.  This week’s number is -609 kbpd.  It is possible that production fell more than the DOE estimate.

The above chart shows the annual seasonal pattern for crude oil inventories.  This week’s data showed a decline in crude oil stockpiles.  We are approaching the end of the seasonal withdrawal period.  Although the declines of the last few weeks are supportive, stockpiles remain well above seasonal norms and remain a bearish factor.

Based on our oil inventory/price model, fair value is $34.29; using the euro/price model, fair value is $57.11.  The combined model, a broader analysis of the oil price, generates a fair value of $45.81.  The wide divergence continues between the EUR and oil inventory models.  As the trend in the dollar rolls over, it is bullish for crude oil.  Any supportive news on reducing the inventory overhang could be very bullish for crude oil.

After a steady recovery since the trough in late April, gasoline consumption has stalled.  We suspect this is related to the surge in COVID-19 infections; if it continues, it is a bearish factor for crude oil prices.

In energy news, the U.S. has expanded economic sanctions on Iran, specifying a series of industrial metals thought to contribute to Iran’s missile program.  A total of 22 metals were listed; any nation trading these with Iran could be subject to sanction.

Saudi Arabia, with the help of the Chinese, constructed a facility to make “yellowcake” from uranium ore.  This is an important step in the nuclear process and suggests the kingdom has decided to at least create the infrastructure for a nuclear program.  This news follows on the heels of reports that the UAE opened a nuclear power plant.  The U.S. has tried to prevent Middle East nations from going nuclear.  It failed to stop Pakistan and it is thought that Israel has a nuclear weapon.  But, Iran’s drive to be a nuclear threshold state and America’s steady withdrawal from hegemony appears to be leading Arab states to at least start the process for their own nuclear programs.

Turkey has been involved in Libya, supporting Islamist factions against secular forces operating in the eastern part of the country.  The secular forces have been aided by Russia, the UAE, and Egypt.  To reduce Turkey’s influence in Libya, Egypt has allegedly sent troops to Syria to bolster Assad’s military aligned against Ankara.

As the pandemic affects global trade flows, the Gulf States are increasingly concerned over food security.  These nations are mostly desert and are thus dependent on imports for much of their food supply.  They have been taking increasingly aggressive steps to manage this issue.