Crude oil inventories fell more than anticipated, declining 4.7 mb compared to forecasts of a 3.0 mb decline.  The SPR declined 1.8 mb; since peaking at 656.1 mb in July, the SPR has drawn 6.6 mb.  Given levels in April, we expect that another 14.5 mb will be withdrawn as this oil was placed in the SPR for temporary storage.  Taking the SPR into account, storage dropped 6.5 mb.

Next week’s data, and data for the next few weeks, will likely be affected by Hurricane Laura.  The storm will disrupt refinery operations and seaborne trade for the next few weeks.  In 2005, the combination of Hurricanes Katrina and Rita took refinery operations from 95% to just below 70%.  Although we don’t expect a repeat of that situation, we will see a drop in refinery operations.  Currently, the nation is well stocked with crude oil and distillates (diesel).  A bit worrisome is that gasoline stockpiles are less ample, although demand remains low enough that we don’t expect a sustained jump in prices due to the hurricane.

Based on our oil inventory/price model, fair value is $37.99; using the euro/price model, fair value is $64.09.  The combined model, a broader analysis of the oil price, generates a fair value of $51.16.  The wide divergence continues between the EUR and oil inventory models.  As the trend in the dollar rolls over, it is bullish for crude oil.  Any supportive news on reducing the inventory overhang could be very bullish for crude oil.

Gasoline consumption has started to edge higher.  Although we probably won’t see the usual seasonal decline in consumption (there wasn’t much of a vacation season), the improvement we are seeing is consistent with a better economy. 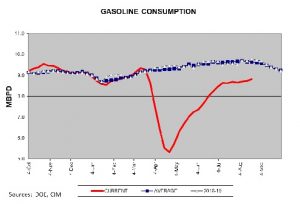 In oil news, Kuwait and the Kingdom of Saudi Arabia (KSA), with the support of the U.S., are looking to link the power grid of these Gulf States to Iraq.  Baghdad has mostly fallen under the sway of Iran since most U.S. forces have left Iraq, but the dominance isn’t complete.  The hope is that if Iraq’s economy is tied more closely to the Arab states, Iranian influence can be weakened.

Massive public investment projects continue in the KSA despite weak oil prices.  It is clear that CP Salman is moving quickly to diversify the Saudi economy away from oil and believes these megaprojects are the path to foster this goal.  Although we do agree that we are probably now past the era of peak oil (the removal of Exxon (XOM, 40.03) from the Dow Jones is a symbol of this trend), we are not sure that these projects will give the KSA the ability to diversify from oil.  At the same time, the existence and high priority of these projects indicate Riyadh does see that its current economic structure won’t last indefinitely.

The UN Security Council has rejected a U.S. bid to “snapback” suspended sanctions on Iran for violating the terms of the Iran nuclear deal.  After pulling out of the arrangement and implementing unilateral sanctions on Iran, the U.S. wanted to reinstate the international ones that existed before the deal was made in 2015.  Although American sanctions are potent, they lack the international credibility of the UN imprimatur, and thus the odds are increased that other nations may violate American sanctions.

Economists have argued for some time that the most efficient way to reduce hydrocarbon consumption is with a carbon tax.  Creating a price for carbon gives signals to consumers and producers that support changes in behavior.  California is the only U.S. state with a modified version of a carbon tax (it uses a “cap and trade” model that is similar to a tax), where preserving forests, which pull carbon dioxide out of the atmosphere, can offset carbon production in other parts of the economy.  This gives trees an economic value other than for tourism and lumber.