Crude oil inventories fell less than anticipated, declining 1.6 mb compared to forecasts of a 2.9 mb decline.  The SPR declined 2.7 mb as oil that was placed in the SPR for temporary storage is now being put back into the commercial system.  Taking the SPR into account, storage dropped 4.2 mb. 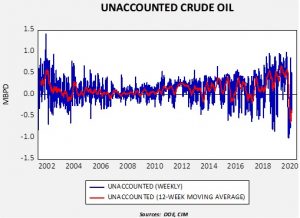 Unaccounted-for crude oil is a balancing item in the weekly energy balance sheet.  To make the data balance, this line item is a plug figure, but that doesn’t mean it doesn’t matter.  This week’s number is -421 kbpd.  Although the volatility of this number is elevated, the trend is slowly stabilizing.

Based on our oil inventory/price model, fair value is $36.48; using the euro/price model, fair value is $64.08.  The combined model, a broader analysis of the oil price, generates a fair value of $50.41.  The wide divergence continues between the EUR and oil inventory models.  As the trend in the dollar rolls over, it is bullish for crude oil.  Any supportive news on reducing the inventory overhang could be very bullish for crude oil.

Gasoline consumption remains stalled.  Although we probably won’t see the usual seasonal decline in consumption (there wasn’t much of a vacation season), the slowing of consumption does suggest a weaker economy. 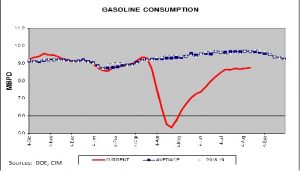 In oil news, the Trump administration is postponing a politically fraught decision on ethanol.  There is a mandate from the EPA on ethanol blending.  The original law mandated that 36MM gallons of biofuels would be part of the transportation fuel mix by the early 2020s.  The industry has not been able to hit that number; last year, there was 15.8MM gallons produced, down slightly from the prior year.  The farming industry wants to force the mandate, whereas the petroleum industry, especially refiners, want to avoid it.  What happens in practice is that the government maintains the mandate but liberally grants waivers to refiners, meaning that the growth in ethanol production has been flat.  When the bill was signed by President Bush in 2007, it was assumed that gasoline demand would continue to rise.  In that way, the mandate could have been met without increasing the percentage of ethanol blended into gasoline.  But, the 2007-09 recession and the sluggish recovery that followed led to flattening gasoline consumption, meaning the only way to achieve the law’s goals is by increasing the blend percentage. 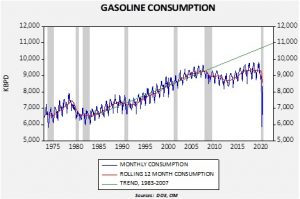 This year’s recession is likely to weaken demand further.  Not only was the drop in growth historic, the work from home trend that the pandemic triggered could fundamentally alter commuting.  Although public transportation demand has slowed, it is likely that at least some workers will work from home at least part time.  That means the mandate will become even more difficult to meet.  The administration is faced with displeasing two constituents—farmers and the oil industry.  There is really no solution that will please both.  So, we would not expect a resolution before November.

Often in political trends, we see an emerging development that faces a counter movement.  In other words, “the Empire strikes back.”  During the Reformation, for example, there was a counter-Reformation that eventually led to a kind of cold peace within Christendom.  Sometimes, the countertrend only slows the emerging one.  We may be seeing something in the latter with regard to oil energy.  The current administration is pro-petroleum, but the broader societal trend is heading in the opposite direction.  One item that tends to support this idea is that drilling activity remains soft even with the recovery in oil prices.  Major oil companies are rethinking their long-term strategies and governments are nudging them in this direction.  Whenever we observe potential inflection points, we try to look for items that both support and dispute the potential change in trend.  For example, the U.S. has taken steps to open more of Alaska for drilling.  If oil companies jump at the chance, the “death of oil” is probably premature.  On the other hand, if no actions are taken, it would bolster the case that the oil industry is on a long-term downtrend.  Here’s another bit of evidence contrary to the death of oil.  Chevron (CVX, 89.48) is looking to invest in Iraq.  If one thought that oil demand was going to decline, it is highly unlikely they would take the risk of drilling in a volatile political environment like Iraq.  So, the jury is still out, although the weak performance of oil stocks overall would suggest that the death of oil trend may still win out.  Another item supporting oil’s continued dominance is that the Democrats have removed language calling for the end of fossil fuel subsidies and tax breaks from the final party platform.  At the same time, we have seen a surge in “green” equity performance, suggesting the trend against oil may be gaining momentum.

Working in the oil industry, like any profession, has its good and bad points.  To the former, the work often pays very well.  It also can be interesting, taking its workers to different parts of the world in challenging environments.  Cutting edge technology is also part of the business.  On the downside, it is brutally cyclical; when its good, its great, but the troughs can be difficult. 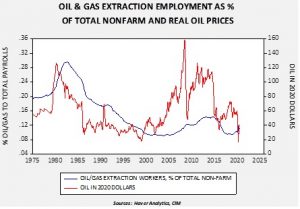 This chart shows the percentage of oil and gas workers to total non-farm payrolls compared to inflation-adjusted oil prices.  As the chart shows, employment is sensitive to the price of oil.

A number of commodity industries are struggling to attract younger workers.  The average age of farmers has been rising for some time.  The reputation of the oil industry has been under pressure over the issue of climate change; it appears that younger workers are shunning the industry over those concerns.  If this trend continues, the industry can only survive by improving productivity.

Although reducing carbon emissions is helpful in offsetting the potential impact of climate change, in reality, even if all carbon emissions stopped today, the existing levels will continue to affect the climate for decades.  To truly reverse the impact of carbon in the atmosphere, we would need to remove the carbon that already exists.  Scientists and engineers have been working for some time on such technologies.  We note reports that Occidental Petroleum (OXY, 13.95) is working with privately held Carbon Engineering to build a carbon capture plant in the Permian basin.  If this technology develops, it is probably the most promising route to dealing with climate change.

The Trump administration is attempting to trigger the “snapback” provisions of the Iran nuclear deal even after its withdrawal from it.  The U.S. is claiming that it is still a “participant” despite its withdrawal and thus can request a return to earlier weapons embargoes that were part of the original agreement if Iran failed to comply.  We doubt this will go anywhere, meaning that the conventional weapons ban will likely expire in October.  It remains to be seen how the administration will react if states begin selling arms to Iran.  Russia and China could both decide to sell arms to thwart U.S. goals with Iran.