After last week’s recovery, selling has resumed; this week’s data and fears of weaker demand due to COVID-19 are pressuring prices. 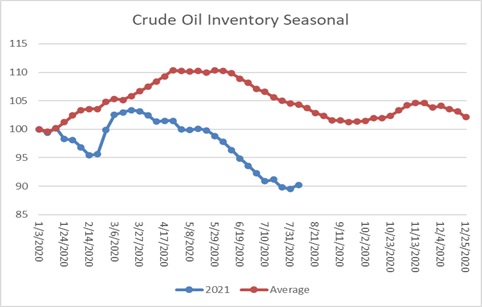 This chart shows the seasonal pattern for crude oil inventories.  We are well into the summer withdrawal season.  Note that stocks are well below the usual seasonal trough seen in early September.  A normal seasonal decline would result in inventories around 550 mb.  Our seasonal deficit is 69.7 mb.  Since early July, inventory levels have stabilized; as the chart indicates, seasonal inventory stabilization usually occurs in September, so if this pattern continues, the seasonal deficit should narrow.