Prices are testing long-term support near $90 per barrel for crude oil. 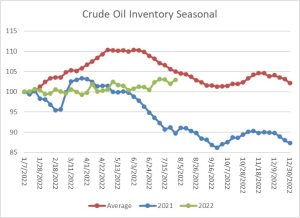 The above chart shows the seasonal pattern for crude oil inventories.  Clearly, this year is deviating from the normal path of commercial inventory levels.  The fact that we are not seeing the usual seasonal decline is a bearish factor for oil prices.

With so many crosscurrents in the oil markets, we are beginning to see some degree of normalization.  The inventory/EUR model suggests oil prices should be around $65 per barrel, so we are seeing about $30 of risk premium in the market.

One of the challenges in determining “how high” gasoline prices truly are is to find the proper scaling variable.  The most common metric is to deflate the current price by some price index.  Although that method is sound (it compares gasoline prices to other items), it doesn’t, in our opinion, capture the centrality of gasoline prices.  After all, a commuter often has limited ability to substitute either a fuel (cars tend to only use gasoline) or a travel method (car sharing requires coordination, public transportation varies by locale).

As an alternative to using a price index, we take the nominal hourly wage for a non-supervisory worker and divide into that wage the current average national price of gasoline.  This measure calculates how many gallons of gasoline a worker can purchase for an hour’s worth of work.  The scaling method isn’t perfect as it doesn’t take into account taxes and benefit costs, for example, but it does allow us to compare the current price to history.

The below chart shows that calculation along with the Presidential Approval Ratings.  On the left axis, the higher the number, the more gallons one can buy with an hour’s worth of work.  So, the higher the reading, the better off the worker is.  Over time, the average is 8.6 gallons.  As the chart shows, we are well below that level at present.  It’s also clear that Presidential Approval Ratings and the number of gallons one can buy “rhyme.”  The two variables are not perfectly correlated.  There are several spikes in approval tied to wars or other geopolitical events that sometimes occur with lower gallon per hour readings.  But, overall, President Biden’s low approval ratings is not being helped by falling gallon per hour numbers. 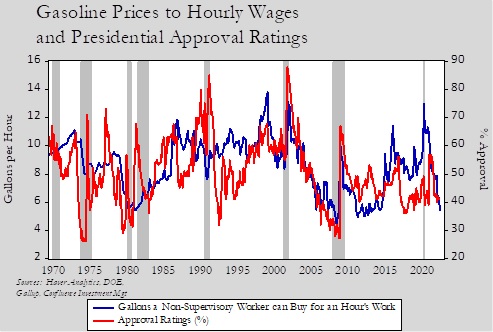