In the details, U.S. crude oil production was unchanged at 13.0 mbpd.  Exports fell 0.7 mbpd, while imports declined 0.1 mbpd.  Refining activity fell 5.0%, well more than the 0.1% decline forecast.  The inventory build was due to a combination of falling exports and a severe decline in refinery operations.

The above chart shows the annual seasonal pattern for crude oil inventories.  This week’s report has lifted stockpiles well above seasonal norms.  Although not totally unexpected, this is the first week where the impact of COVID-19 and the oil war has started to affect the weekly data.

In the coming weeks, there are two key factors we will be monitoring.  First, we will start looking at the impact of the virus on demand.  This week, we are seeing the first signs that the virus has affected product demand.  The chart below shows the four-week average of gasoline supplied to the distribution system.  As the chart shows, shipments have cratered.  Distillate demand is holding up better, reflecting the increases in delivery of goods. 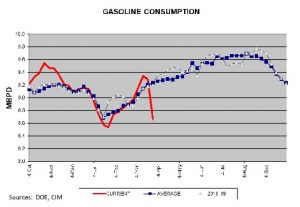 We also note that refinery activity is rolling over. 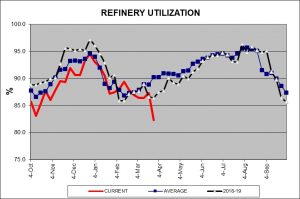 This sort of decline is usually seen during severe weather events, such as hurricanes.  The COVID-19 crisis will almost certainly last longer and thus will negatively impact crude oil consumption.

Second, estimated primary U.S. commercial crude oil storage is around 510.0 mb.  An additional 110.0 mb is available at refineries and in pipelines.  The total capacity of the Strategic Petroleum Reserve (SPR) is 713.5 mb, of which 635 mb is already being utilized, meaning there is an additional 77.5 mb.  Once primary storage is filled, secondary storage will be utilized.  However, it tends to have a higher cost and is less accessible than primary storage.  Producers fund storage costs via the calendar spreads in crude oil.  When the spread is positive, they produce oil today to sell in the future.  Currently, producers can earn $4 per barrel by producing oil now and selling it six months into the future.  The chart below shows the rolling six-month crude oil calendar spread. 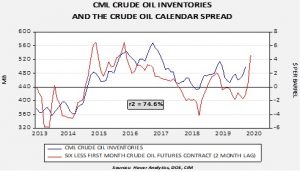 Adding to inventory pressure are two other factors.  First, rising U.S. crude oil exports have been a key factor in reducing U.S. crude oil inventories.  As OPEC+Russia boost output and exports, it will be difficult for exports to be maintained.  If exports decline, that crude oil will need to be stored. 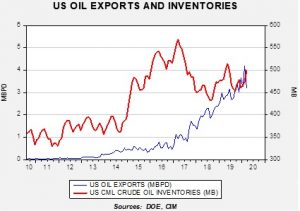 On the international front, so far, the U.S. has had little success in getting either Russia or the KSA to back away from their adversarial positions.  The KSA is poised to dramatically ramp up output.  The U.S. is considering easing Iranian sanctions due to COVID-19.

On the domestic front, the White House is considering restricting oil imports in a bid to protect domestic producers.  Texas regulators are reopening the debate on having the Texas Railroad Commission return to its role of regulating oil production.  Although Congress did not include funding for SPR purchases, the White House is considering a program to allow firms to lease the SPR for additional storage.

In conclusion, the current market fundamentals are about as bearish as we have ever seen.  It will take significant government and OPEC intervention to stop the downdraft.  History suggests that such actions rarely occur until prices reach unfathomable levels.  Although we are friendly to a number of different asset classes, oil isn’t one of them.  Somewhere between now and Labor Day, some sort of resolution is likely, but it probably gets much worse before it improves.