In the details, U.S. crude oil production fell 0.1 mbpd to 12.3 mbpd.  Exports rose 0.6 mbpd, while imports declined 0.2 mbpd.  Refining activity fell 6.5%, well more than the 2.2% decline forecast.  The inventory build was mostly due to the continued collapse in refinery operations.

The above chart shows the annual seasonal pattern for crude oil inventories.  The last three weeks have pushed stockpiles almost “off the charts.”  Although not totally unexpected, this is the first week where the impact of COVID-19 and the oil war have started to affect the weekly data.

Based on our oil inventory/price model, fair value is $38.75; using the euro/price model, fair value is $44.90.  The combined model, a broader analysis of the oil price, generates a fair value of $41.04.  As we noted recently, the model output is less relevant as there is a non-linearity tied to the loss of storage capacity that cannot be fully captured with these models.  If storage capacity is fully utilized, a catastrophic decline in prices, which we would define as low teens, is possible.

As promised, here are a couple charts that look at U.S. oil demand.  The chart below shows the four-week average of gasoline supplied to the distribution system.  As the chart shows, shipments have cratered.  Distillate demand is holding up better, reflecting the increases in delivery of goods. 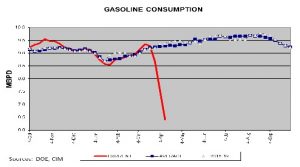 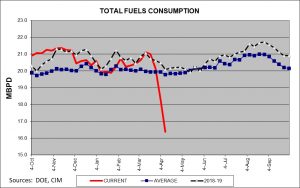 The last time we saw a drop of this magnitude was during the depths of the Great Financial Crisis.  Over the past four weeks, refineries have reduced their oil consumption by 3.2 mbpd, far exceeding the drop of 0.5 mbpd in production.  The underlying fundamentals for crude oil continue to deteriorate.  The DOE reduced its forecast for U.S. production this year to 11.8 mbpd.  This means that production can be expected to decline further.

The Trump administration did patch together a broad OPEC+ deal; in total, the participants agreed to reduce oil output by 9.7 mbpd.  However, as is usually the case with these sorts of agreements, the details tend to underwhelm.  Some of the nations involved used higher baselines to make their announced cuts.  Our take is that the OPEC+ cuts are probably more in the neighborhood of 7.0 mbpd.  And, that relies on Russia actually cutting output, which is something of a rarity; the Russians usually promise but tend not to deliver.  The OPEC+ group and the G-20 have promised production cuts of up to 20.0 mbpd.  Although that cut would help stabilize the market, there is a high degree of skepticism surrounding the deal.  One element of skepticism is that the KSA has cut its posted prices to Asia, while increasing them to the U.S.  Part of the share war was over the Chinese market and Saudi Aramco’s (2222, SAR 30.70) decision to lower prices to the Asian market suggests the KSA isn’t really backing down.  At the same time, raising the U.S. price will likely mollify the Trump administration.

Making the U.S. happy is critical to the KSA.  The kingdom relies heavily on the U.S. military for protection and it needs the U.S. financial markets to recycle its dollar balances from oil.  President Trump had numerous levers to pull to elicit Saudi cooperation.  The U.S. could have implemented tariffs or quotas on Saudi oil imports.  Military support could have been reduced.  Perhaps the most potent threat would have been to deny the KSA access to U.S. financial markets.  The Saudis were going to make a deal with the U.S.; the bigger issue is whether the deal will be effective.

Market conditions are better with the arrangement than without.  If negotiations would have failed, it would have led to catastrophic market conditions.  A plunge in prices to single digits would have been likely.  Such a decline may have triggered political instability in the Middle East and triggered a corresponding spike in prices.  A deal does avoid massive market volatility.

However, as the steady decline in prices this week suggests, the deal doesn’t solve the low-price problem either.  That’s because we are seeing a massive drop in demand.  The IEA projects that oil demand will fall by 23.1 mbpd in Q2 compared to the previous year.  The proposed output cuts simply can’t offset declines of such magnitude.

Our expectation is that oil prices will fall steadily into the low teens.  Markets without interference will eventually clear.  They will clear by higher cost producers ceasing production.  In the private sector for oil, this will mean bankruptcies and buyouts.  Some production that gets shut-in probably never comes back.  In Texas, some producers are calling for the Texas Railroad Commission to step into the market and allocate production, something this body did from 1932 to 1970.  Companies operating in the state are divided on this action as is the commission itself.  The legality is on somewhat thin ice (production allocation violates U.S. antitrust laws).  Our read is that conditions will need to get much worse before there is a unified response for such action.  That scenario may occur in the coming weeks.

A new solution has emerged—paying oil companies not to produce.  The U.S. has a long history of intervening in commodity markets.  The grain markets have deep government involvement.  The USDA has bought grain from farmers at set prices, paid farmers not to grow crops on marginal fields, and simply paid farmers money (as we saw last summer due to the trade war with China).  We think we are still some distance from this outcome but, for the first time, direct aid to oil companies is being considered.  We will see how Congress handles that appropriation.  Perhaps this could be a bargaining point for the stalled small business aid boost.

There are reports that Iran is interfering with Persian Gulf shipping.  Although we don’t expect Tehran to precipitate a conflict, conditions are fluid and there is always the possibility that a mistake could be made.