It appears oil prices are attempting to create a trading range between $105 to $95 per barrel.  That may hold until the SPR release is complete.

In the details, U.S. crude oil production rose 0.1 mbpd to 11.9 mbpd.  Exports rose 2.1 mbpd, while imports declined 0.2 mbpd.  Refining activity increased 1.0% and is now 91.0% of capacity.  This week’s large and unexpected draw was mostly due to rising exports, although the increase in refinery operations contributed to the draw. 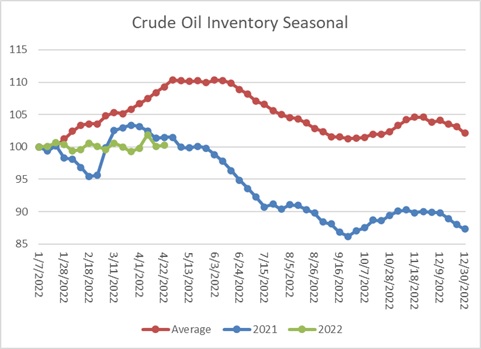 This chart shows the seasonal pattern for crude oil inventories.  This week’s report is consistent with last year; also, note that in the average data, we are at the point where the seasonal build period has ended.  Over the next few weeks, we will see if we follow the average path or track last year.