Oil prices appear to be settling into a trading range.

In the details, U.S. crude oil production is unchanged at 11.8 mbpd.  Exports fell 1.5 mbpd, while imports declined 0.3 mbpd.  Refining activity dropped 2.5% and is now 90.0% of capacity.  This week’s large and unexpected draw was due to the decline in refinery operations and exports.  We don’t expect these factors to continue. 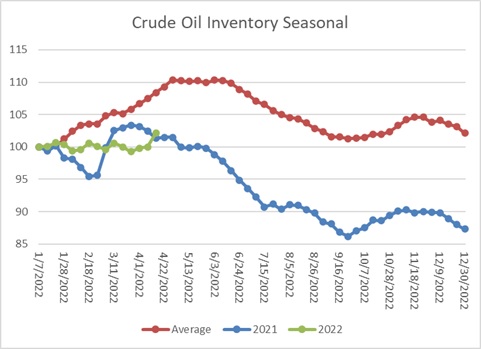 This chart shows the seasonal pattern for crude oil inventories.  This week’s large build is reflected in the chart.  If this continues, we could reach the normal seasonal high in the coming weeks.  However, in this week’s report, we noted a large decline in refinery operations and exports, so we probably won’t see builds at this level in the near future.