Oil prices remain volatile, moving on war news.  The SPR release will likely be bearish for prices.  Technically, the oil chart appears to have a descending triangle, which is often a bearish pattern. 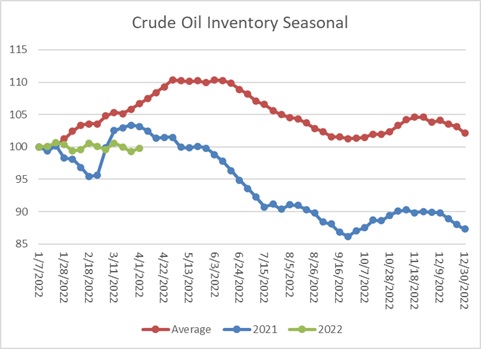 This chart shows the seasonal pattern for crude oil inventories.  Last year, oil stocks peaked in early April and fell steadily into September.  With the announcement of the SPR release (see below for details), we should see rising commercial stocks in the coming weeks.  However, the actual pattern will depend on the logistics of the sale.

With so many crosscurrents in the oil markets, we see some degree of normalization.  For the time being, we would expect oil to fluctuate between $105 to $90 per barrel, with a bias to the downside in the short term.  However, we doubt the SPR release will be a long-term bearish factor, and if the war drags on, there is a growing likelihood the price will rise and return to recent highs.

Last week, the administration announced the largest sale from the Strategic Petroleum Reserve in its history.  The plan is to release 1.0 mbpd for 180 days.  The chart below shows the projected sale’s effect on the SPR. 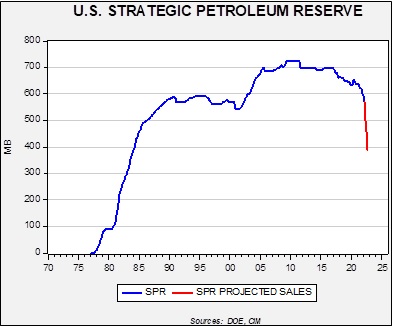 The IEA announced other nations would join in the sale, although amounts were unspecified.  There are a number of reasons and features for the sale.  Here are the points we found interesting: 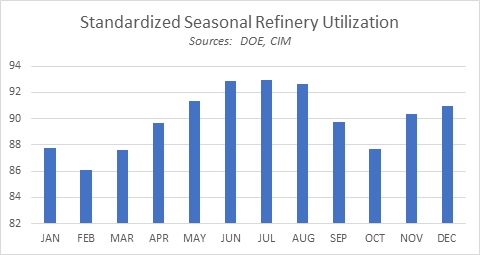 This chart shows standardized seasonal refinery utilization.  As the chart shows, refineries engage in maintenance in the winter and autumn.  Our current reading for utilization is 92.5%, which is near the usual peaks seen in summer.  Although run rates in excess of 95% are not unprecedented, they only occur about 9.4% of the time.  The bottom line is this: although increasing the availability of crude oil will help reduce gasoline prices, gasoline supplies depend on refining.  With capacity approaching levels we consider constrained (any reading above 95%), the impact of the additional oil will likely be lessened by the lack of excess refining capacity. 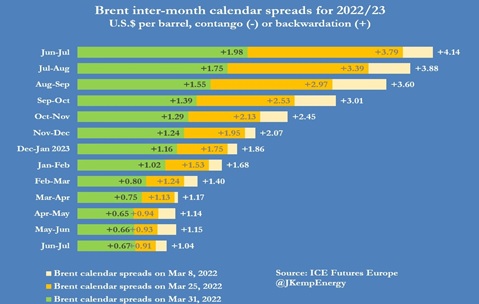 We harbor serious doubts this oil will ever be replenished.  As the SPR chart above shows, with the exception of a modest rebuilding in mid-2020, stocks have been drawn down since peaking in 2011.  Buying oil requires a budget decision, and there is always something else that a government would rather spend money on.  In addition, given that the U.S., on balance, is a small net exporter, it isn’t obvious why an SPR exists.  After all, the IEA requires OECD nations to hold 90 days of net oil exports.  The U.S., by this measure, is over reserved. 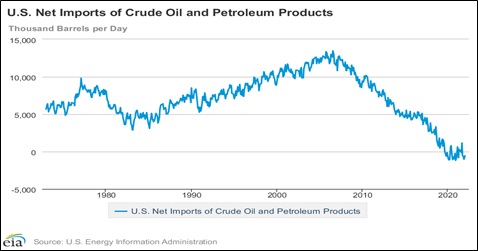 Perhaps a more important issue is that the goal of climate change policy (see below for recent reports on the topic) is to reduce fossil fuel consumption dramatically.  If it is successful, the SPR could become a stranded asset.  Thus, refilling it seems like an exercise in futility.