Happy Monday!  Global equity markets are edging higher this morning.  China’s economic data was a bit soft.  Russian local elections were a rebuke of Putin.  The Brexit saga continues in Ireland.  Here is what we are watching this morning:

Russia:  In Moscow’s city council elections over the weekend, the ruling United Russia Party of President Putin lost more than one-third of its seats in spite of its aggressive efforts to keep opposition candidates out of the competition over the last several months (as we discussed in our Weekly Geopolitical Report on July 15).  United Russia will still have a majority on the council, with 24 of the 45 seats, but opposition legislators will gain a significant soapbox to stand on with 20 seats.

Russia-Ukraine:  As part of a Russia-Ukraine prisoner swap, two dozen Ukrainian sailors detained by Russia last November have been released.  Ukraine also secured the release of 11 other Ukrainians held by Russia, while Russia got dozens of Russians and other citizens that Moscow wanted.  The swap suggests Ukraine’s new president, Volodymyr Zelenskiy, is continuing to make progress on diffusing tensions with Russia.  Although we doubt Zelenskiy can reverse major Russian moves such as the annexation of Crimea, he could potentially ease or end Moscow’s support for Russian separatists in Eastern Ukraine.  That, in turn, could take some wind out of Russian sanctions sentiment in the West.

Iran:  An Iranian foreign ministry spokesman said the crude oil tanker previously seized and released from Gibraltar has unloaded its cargo, apparently in Syria.  That would seem to violate Iran’s promise to Gibraltar authorities that the oil would not go to Syria, which is under European Union sanctions.  The apparent breaking of the promise will likely keep tensions high between Iran and the West, helping keep oil prices higher than they otherwise would be.

China data:  Exports fell 6.0% in August compared to July, while imports fell a more modest 2.7% (CNY terms; media headline data is using USD terms).  It does appear that the combination of tariffs and slowing global growth is putting pressure on China’s export sector.  Exports to the U.S. plunged 16% from last year but some of that decline is likely due to transshipments, where Chinese exports go to other nations and eventually end up in the U.S.  Overall, exports from China are declining and the Xi government is going to have to either find other sources of demand or begin to more aggressively stimulate.  There are growing worries among investors that China’s economy is weaker than the official data suggests.

One factor that will help is that foreign reserves remain ample. 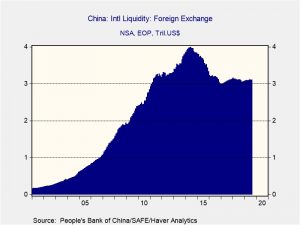 Reserves were mostly steady in August.  The fact that reserves are holding up suggests that the recent CNY volatility hasn’t triggered significant capital flight and signals to the PBOC that steady, modest depreciation can be implemented without triggering investor unrest.

A China trade thaw?  There are reports of a “mini-deal” where the U.S. would delay the October 1 tariffs and ease the pressure on Huawei (002502, CNY 3.24) in return for agriculture purchases.  At first glance, this seem like an uneven offer.  The tariffs cover $250 bn of imports and giving in on Huawei would look bad.  To make this work, China’s purchases would have to be huge.  If the administration takes this deal, it would suggest they are worried about the impact of the trade deal on the economy and markets.  The “whiff” of an agreement is helping to lift stocks.

Hong Kong:  Protests continued in Hong Kong; protestors waved American flags in an attempt to gain sympathy from U.S. lawmakers.  We don’t expect much movement on Hong Kong until after the party meetings in early October.  Although we are not seeing anything overt, there is talk of “grumbling” about Xi’s leadership; after all, he now faces unrest in Hong Kong that doesn’t appear to be abating and he has “lost” China’s relationship with the country’s most important trading partner, the U.S.  Xi has solidified power with the purges he held in his first term.  Thus, he will probably remain in power, but his grip may be weakening and we might see new leadership emerge if conditions don’t improve.

Brexit:  PM Johnson suffered yet another political blow when his work and pensions secretary, Amber Rudd, resigned over the weekend.  She left because she doesn’t believe Johnson really wants a deal with the EU.  Johnson is in Dublin today to try to heal frayed relations with Ireland; the Irish have already indicated that they don’t expect much from the meeting.  Meanwhile, France has suggested that if the U.K. doesn’t have anything new to offer, it might not agree to an extension.  Although we think this is a bluff, Macron is rather tired of Brexit and would rather see Britain off and regroup with the remaining EU members.

Meanwhile, there is swirling speculation about what Johnson’s next moves might bring.  We do not expect him to ask for snap elections for a second time; odds of passage are very small.  From there, things could get weird.  There is speculation that Johnson might offer a vote of no-confidence on his own government, which would only need a mere majority.  This action would bring down the government, resulting in a caretaker government and new elections.  Another possibility would be him quitting and petitioning the Queen to appoint opposition leader Corbyn to take power, only to immediately make a no-confidence motion, which he might win, bringing new elections.  There is also speculation that Johnson might reject the will of Parliament and not ask for an extension of Article 50.  That would trigger a constitutional crisis.  Thus, there is the potential for significant turmoil in the next six weeks; the fact that the GBP (that’s Great Britain pound, not peso) is holding steady does suggest we may be reaching a price level where most of the bad news is discounted.

A Saudi shakeup:  Crown Prince Salman fired Energy Minister Khalid al-Falih, replacing him with his older half-brother, Prince Abdulaziz bin Salman.  This breaks a longstanding tradition where the Royal Family leaves the oil industry in the hands of the technocrats.  Although this does put a family member in charge of the oil industry, the new energy head has extensive experience in the Saudi oil industry.  Why the shift?  We suspect there are two reasons.  First, the former energy minister was “slow walking” the Saudi Aramco IPO; the crown prince wants to use funds from the sale of the state oil company to fund his plans to develop the kingdom’s economy away from its dependence on energy.  Second, oil prices have languished under al-Falih; the crown prince wants oil prices in the high $60s to low $70s to boost revenue in the short run and to lift the IPO price.  If our analysis is correct, we will (a) see rapid movement on the IPO, and (b) see further output restrictions and higher oil prices.  Oil prices are modestly higher this morning on the news.

Mexico:  The government of left-wing President Andrés Manuel López Obrador has released a proposed budget for 2020 that aggressively assumes the economy will grow 2% next year, versus just 1% this year.  The budget also assumes Mexican oil production will grow 15% next year, despite years of declines.  Based on those assumptions, the document claims the government can boost spending on an array of social programs, while still keeping the overall budget deficit at just 2.1% of gross domestic product (GDP).

The Taliban talks:  We won’t spend a lot of time on this issue because it had little immediate impact on the financial markets.  But, in a bid to accelerate a deal, President Trump tried to broker a meeting between the Taliban and the Afghan government.  However, a Taliban bombing that killed a U.S. soldier led the president to call off the meeting.  The meeting underscores the problem for superpowers, which is the issue of extricating from these sort of conflicts.  On the one hand, Afghanistan isn’t critical to U.S. security.  This is the problem seen during U.S. hegemony; how does the hegemon maintain credibility and avoid entanglements?  This problem bedeviled Truman, Johnson, Clinton, Obama and, now, Trump.  Trump campaigned on getting out of these types of conflicts, but leaving usually means exiting without “finishing the job” because it may be nearly impossible to do so.  However, staying and maintaining credibility leaves one fighting an endless war.