[Posted: 9:30 AM EDT] There were two big news items overnight.  First, North Korea detonated a nuclear device overnight, its fifth such test.  Early reports suggest the blast was in the 20 to 30 kiloton range, not a big bomb (by comparison, the standard American warhead, W-88, is 475 kilotons), but it does appear the North Koreans are mastering the nuclear cycle.  We know they are working on moving from devices to warheads, and if they reach that level of development then they will have a capable nuclear deterrent.  It also looks like the Kim regime believes such a deterrent is necessary.

Although there was general condemnation of the act, the nation with the greatest influence over the Kim regime, China, is less focused on North Korea and is most upset with South Korea for deploying anti-missile defense systems from the U.S.  It is highly likely that North Korea decided to detonate this device because it felt that China would allow it.

The other interesting news item is that the Fed has recommended to Congress that financial holding companies be denied the ability to invest in non-financial companies.  This rule was part of the initial Glass-Steagall Act and was clarified further in the 1956 Bank Holding Company Act.  But, when deregulation ended these restrictions in the late 1990s, bank holding companies could engage in this activity.  In addition, the Fed also recommended that banks no longer be able to directly hold physical commodities.  This may affect commodity ETFs that hold physical products instead of futures contracts.  This wouldn’t mean these products will go away, but that banks couldn’t sponsor them.

This action represents a further step in re-regulating the financial system.  Although these merchant bank activities have become less important since the financial crisis, these new rules will prevent banks from returning to them if they become lucrative again.  The action also sends a signal that regulators are steadily returning banks to a more traditional role, which will probably make them less risky but also reduce their profitability.

This chart shows current crude oil inventories, both over the long term and the last decade.  The drop this week was huge, but likely temporary.  Imports last week fell by 1.8 mbpd due to disruptions caused by tropical storms.  Usually, importers furiously rebuild stocks in the weeks following such an event.  Thus, over the next two weeks, we would expect much of this 14.5 mb draw to be replaced.

The unexpected drop in storage has put inventories below the normal seasonal trend.  Again, we would expect that drop to be reversed in the coming weeks. 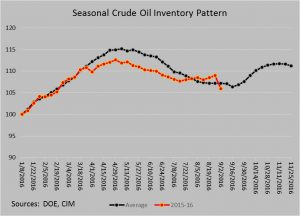 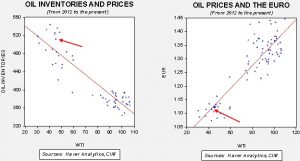 Based on inventories alone, oil prices are profoundly overvalued with the fair value price of $40.87.  Meanwhile, the EUR/WTI model generates a fair value of $49.22.  Together (which is a more sound methodology), fair value is $44.55, meaning that current prices are a bit rich.  Although the market has put great hope on an OPEC deal next month, the plan looks to be more like jawboning the market higher.  Recent comments from various OPEC members suggest that they would like stable prices, which we could argue they are getting, but none of the major producers seem ready to actually cut production at this point.  In fact, there are reports that the cartel wants prices no higher than $60 per barrel, fearful that prices above that level will spur a rise in shale production in the U.S.   For most of the history of oil prices, stability has been the norm, which is common with cartel markets.  Thus, we would expect the Saudis to gravitate toward a $50 price with a range of $5 per barrel around that point.  Using the aforementioned combined model, and assuming a €/$ of 1.1300, a U.S. crude inventory level of 482 mb would put fair value just above $50 per barrel.  Current inventories are 511.4 mb, or about 29 mb above this level.

In fact, the most bullish scenario for oil may have little to do with oil stockpiles and more to do with the dollar.  Yesterday, ECB President Draghi offered no new stimulus and the EUR rallied.   Assuming no change in U.S. stockpiles, a €/$ of 1.1556 would generate a fair value of $50.  Our calculation of purchasing power parity for the exchange rate is around 1.3000; again, assuming stable inventories, the fair value for oil at that exchange rate is $73.35 per barrel.  If the ECB is finished with policy stimulus and the FOMC hits its terminal rate with only a couple of rate hikes, a weaker dollar could develop.  This probably won’t occur this year, but might be a 2017 event.  On the other hand, there are some major political concerns in Europe.  Brexit still has to be executed, Italy has a key referendum next month, Spain will likely require new elections and Portugal may need a bailout.  These worries will likely offset, at least for 2016, any hawkishness from the ECB.