[Posted: 9:30 AM EDT] Market action is sluggish this morning; the big story is the continued weakness in the dollar.  Here is what we are watching today:

The dollar in perspective: The EUR is threatening $1.210 and the greenback continues to slide despite dovish comments from ECB President Draghi yesterday.  The chart below shows the real effective exchange rates for the USD, CAD, EUR, JPY and CNY. 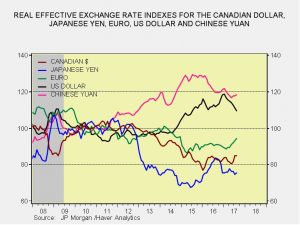 Although the dollar is weakening, it is worth noting that it remains unusually strong against most major currencies except the CNY.  If exchange rates are in the process of normalizing, the dollar still has a lot of room to decline.  In the foreign economic sector, we note that both China and Germany had disappointing export numbers.  Although it’s probably too soon for the dollar’s weakness to have a significant impact on trade, it is possible that we are seeing the early effects.  We also note reports that China is becoming “concerned” about currency strength.  We remain dollar bears and expect greenback weakness to continue.

Nature bites: Hurricane Irma’s path has shifted westward and is now expected to move through the entire Florida peninsula into Georgia and end up as a depression in Tennessee by next Wednesday.  Hurricane Jose looks like it will head into the Atlantic away from the U.S. mainland but is on target to hit Bermuda later next week.  Finally, Katia is expected to make landfall near Veracruz tomorrow morning.  Adding to Mexico’s woes, the country was hit with a major 8.1 (or, based on some reports, an 8.2) Richter scale earthquake yesterday evening.  The epicenter was 60 miles from Mapastepec in the state of Chiapas.  This is the most powerful earthquake to hit Mexico in over a century.  Tsunami alerts were issued for Ecuador, Vanuatu and New Zealand.  All these events will distort economic data for the next two to three quarters.

Warnings of a North Korean missile test: It’s a holiday in North Korea, commemorating the 69th anniversary of the founding of the Democratic People’s Republic of Korea (DPRK).  South Korea is reporting that there are signs of another missile test.  Worries about tests are boosting the JPY and gold this morning.

More on Washington: Yesterday, we detailed Trump’s triangulation with the Democrats.  There are reports the president is working with lawmakers (mostly Democrats) to end debt ceiling votes.  Debt ceiling votes began with WWI; before that, each act of government borrowing required an act of Congress.  To handle the increased spending for the war, Congress set a limit for debt and allowed debt spending to occur until the limit was reached.  Once reached, a new limit would have to be set.  Note that the debt limit pays for spending that has already occurred.  About the only impact the debt ceiling vote should have is to act as a reminder to lawmakers that debt is rising.  However, it has become a tool of the party in opposition to use the leverage of shutting down the government to get its priorities passed.  What is interesting about this potential change is that it is being pushed by a GOP president with Democrat Party support against the will of a significant faction of Congressional GOP members.  We will see if the president can craft a workable legislative majority of Democrats and “Tuesday Group” Republicans to isolate the Freedom Caucus in order to pass other legislation.

Catalonia: Catalonia has voted to set a referendum on self-determination (or secession) for October 1, 2017.  Madrid opposes the vote and will try to prevent it from occurring.  It is possible the courts will prevent the referendum from being held, but even if it is held the Spanish government will likely choose to ignore it.  There are various separatist movements in Europe.  Scotland has been drifting toward leaving the U.K., and Czechoslovakia split into two states in 1993.  This is a real problem for the EU; while EU elites try to unify Europe, states within Europe are facing pressure to split even further.  This makes European unity an even more distant goal.

Although reserves remain well below their 2014 peak, they have recovered from the recent trough of $2.998 trillion.  China has taken steps to slow outflows and, thus far, is having some success.

EU rules that nations must take refugees: The EU Court of Justice has ruled that nations must take their assigned quotas of refugees, rejecting actions brought by Slovakia and Hungary.[1]  It remains to be seen if these two nations will be forced to take refugees; we actually doubt they will.  Many nations in the EU passively rejected their obligations to take migrants coming from the Middle East and Africa.  Hungary reacted angrily to the news and Poland may also face retribution from the EU for its rejection of some migrants.  This is yet another example of the EU overriding national sovereignty in Europe and will raise political pressure for other nations to follow Britain’s example.  That’s why Germany and France are adamant that the U.K. face significant penalties for Brexit to create an example of the cost of leaving the union.

This chart shows current crude oil inventories, both over the long term and the last decade.  We have added the estimated level of lease stocks to maintain the consistency of the data.  As the chart shows, inventories remain historically high but they have declined.  Hurricane Harvey had a dramatic impact on the energy market data this week; the effects should continue for several more weeks.

As the seasonal chart below shows, inventories did turn higher this week but they were affected by the aforementioned hurricane.  We are probably going to start the inventory rebuild period sooner than normal this year.  Although oil imports did decline by nearly 0.9 mbpd and production fell by almost 0.8 mbpd, refinery capacity utilization dropped to 79.7% from 96.6%, or 3.2 mbpd.  Media reports suggest that refineries are working hard to restart operations, but it will probably take a couple of months before the industry can achieve pre-Harvey refinery levels. 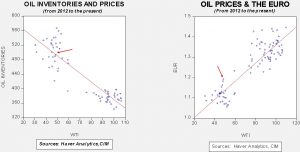 Based on inventories alone, oil prices are undervalued with the fair value price of $53.39.  Meanwhile, the EUR/WTI model generates a fair value of $66.68.  Together (which is a more sound methodology), fair value is $62.16, meaning that current prices are well below fair value.  Although the most bullish factor for oil is currently dollar weakness, the rapid decline in inventory levels is also supportive.

The drop in refinery operations is stunning.