Perhaps the biggest news this morning is that equity markets are set to open lower.  Equities have continued to rally in an orderly fashion, with the major indices setting new record highs.  Stocks have been lifted by improving earnings, low interest rates, moderate inflation and expectations of accommodative policy.  We lead off with specific comments about the EUR and other reports about the economy and markets.  Policy news is next; we cover the Beige Book and ongoing negotiations (or lack thereof) over new stimulus.  Foreign news is next, focusing on the fallout from the Navalny poisoning.  China news follows, and we close with the pandemic update.  Being Thursday, a new Weekly Energy Update is available.  Here are the details:

The Eurozone strikes back:  In a recent WGR (and podcast) on the prospects for a Eurobond, we argued that the issuance of such a bond, which would be backed by the full faith and credit of the member states of the EU, could be a catalyst for a new bear market for the dollar.  Given that the dollar is overvalued in terms of purchasing power, the greenback has been ripe for a few years of depreciation, something that should be welcomed by U.S. policymakers.  The EUR has seen a “summer of appreciation”; in May, the EUR was trading around $1.08.  A couple days ago, it touched $1.20.  The move has caught the attention of ECB officials, who worry that the stronger currency will reduce already depressed inflation.  But, it often takes a retired official to really say what is worrying governments—in a Bloomberg interview, Jean-Claude Trichet accused the Trump administration of “beggar thy neighbor” currency policies and suggested that the EUR should be at its levels seen earlier in the summer.  Trichet’s comments are self-serving; the EUR is still well below our fair value estimate of $1.29 and locking in the EUR below that level gives Europe a competitive advantage over U.S. exporters.  Current officials cannot be so candid, but we suspect Trichet is saying what the EU believes.  It wants to remain an export promoter, and a stronger EUR will force Europe to change. 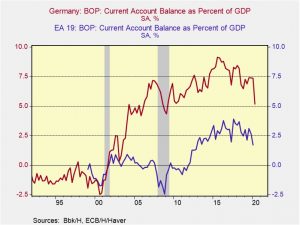 This chart shows the current account relative to GDP for Germany and the Eurozone.  Since the Eurozone crises of the last decade, Germany has used the Eurozone to increase its current account surplus and has turned the entire Eurozone into a “Germany at large.”  A stronger EUR is a threat to this situation.  Will these comments change the trend?  We doubt it.  The EUR is undervalued, and the Eurobond reduces America’s ability to apply economic sanctions.  We view yesterday’s commens as an attempt to slow the appreciation, but not enough to reverse it.

Other economic and market news:

The Beige Book: The Beige Book is an overview of the economy compiled by the regional Fed districts.  It offers a disaggregated view of the economy and can offer some geographic insights about the state of the economy.  In general, the report suggests the recovery continues from the troughs seen in Q2, but the pace does appear to be slowing in most districts.  The labor market conditions described above, where some workers are getting back to work while others are facing layoffs, is shown in this report as well.

Navalny and other foreign news:  Germany has confirmed that traces of Novichok, a nerve agent produced by Russia, has been found in Alexei Navalny, the Russian opposition leader.  German doctors have determined that it was a military-grade agent, suggesting that elements of the Russian security apparatus are probably behind the poisoning.  The key question now is, “What does the West do about it?”  One possibility is that Germany could cancel the Nord Stream 2 project; that outcome would delight Washington and be a blow to Moscow.  Such a move would certainly harm relations between Germany and Russia, but it would send a signal to Putin that his actions do carry consequences.  We could see U.S. natural gas benefit from the cancellation as it would likely increase demand for American LNG.

COVID-19:  The number of reported cases is 26,062,946 with 863,741 deaths and 17,316,206 recoveries.  In the U.S., there are 6,115,184 confirmed cases with 185,752 deaths and 2,231,757 recoveries.  For illustration purposes, the FT has created an interactive chart that allows one to compare cases across nations using similar scaling metrics.  The FT has also issued an economic tracker that looks across countries with high frequency data on various factors.   Axios has updated its state map; the reopening of colleges has led to a rise of infections in several states.