[Posted: 9:30 AM EDT] Oil prices jumped yesterday on an announcement that OPEC had arrived at a deal to cut production.  This was mostly unexpected (we didn’t expect it).  According to early reports, the cartel agreed to cut output by 0.7 mbpd, which included a 0.4 mbpd cut by Saudi Arabia and a cap on Iranian production at 3.7 mbpd.  That agreement would put cartel output at 32.5 mbpd.  As the day wore on, however, the deal was clearly less than advertised.  First, there isn’t really an agreement.  OPEC won’t actually detail production quotas until the November 30th meeting.  The latter commentary suggested that cuts could be in a range between 0.7 mbpd and 0.2 mbpd.  The former is impressive; the latter is mostly a rounding error.  Later comments from the Iranians indicated they will not “have” to freeze output, which we read as “won’t.”

There are other questions.  Why would the Saudis raise the risk of social unrest by announcing a 20% salary cut for government workers, along with subsidy cuts of up to 15% for housing, if they knew they were going to work out a deal with OPEC to lift prices?  Will Saudi civil servants, who represent about 66% of all employed Saudis, go along with less income when they know that the kingdom has a deal to lift oil prices?  What prompted the kingdom to cave into Iran’s demands?  Given recent history, giving in to Iran would suggest that conditions have deteriorated more than the financial data would suggest, or the Saudi princes have rebelled against Deputy Crown Prince Salman and demanded higher oil prices and more revenue.  This seems like a major policy reversal that has come without comment from the DCP.  Finally, the Russians got off without cutting output!

The sharp rise in prices yesterday had all the look of short covering.  OPEC did buy itself some time before it has to make a deal, but a meaningful agreement still looks like a long shot.  Thus, we would be surprised to see much follow through from yesterday.  At the same time, the potential for an agreement will put a floor under prices, meaning that the $40 to $42 price zone (WTI) will probably become a base for the market.  Why?  Because OPEC appears to be working to resume its market-balancing role.  It still isn’t clear whether the cartel is fully behind this resumption and it doesn’t answer the long-term question for oil producers, which is the value of future reserves.  If regulation turns oil into coal in 20 years, why would anyone wait to produce instead of doing so now?

This chart shows current crude oil inventories, both over the long term and the last decade.  For the past three weeks we have seen a steady decline in stockpiles.  As the chart below shows, seasonally, we should see inventories rise as refineries begin their maintenance period.  However, we have seen a sharp drop in oil imports which have exceeded seasonal norms.  Some of that decline was due to tropical disruptions but the drop is clearly noticeable. 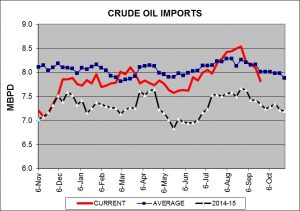 If this trend continues, it would be bullish for WTI.  The seasonal pattern suggests at least a leveling off of import flows and a build in stockpiles. 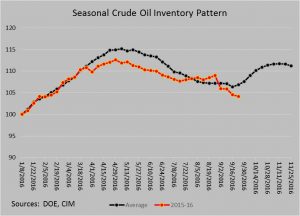 Based on inventories alone, oil prices are overvalued with the fair value price of $45.66.  Meanwhile, the EUR/WTI model generates a fair value of $49.07.  Together (which is a more sound methodology), fair value is $44.17, meaning that current prices are close to fair value. 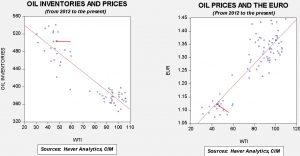