[Posted: 9:30 AM EDT] Happy Friday!  After a tumultuous week, financial markets are being roiled today by Italy.  Here is what we are watching:

The Italian crisis: The populist government in Italy has been pressing against the EU budget rules.  In general, a 2% deficit/GDP ratio is the highest allowed and Italian Finance Minister Giovanni Tria has been signaling that his country would not go over that limit.  However, in the end, the coalition refused to abide by the EU rules and brought a budget with a deficit of 2.4% to GDP.[1]  Tria is not a member of the coalition’s parties; he got the post because of EU pressure.  Market reaction has been swift.

This chart shows the Italian 10-year yield.  On the news, the yield jumped over 30 bps.

For context, here is a longer term chart.

As the chart shows, yields are approaching recent highs.  Perhaps even more worrisome was the yield action in the Bund/Italian spread.

As one would expect, the spread (the lower part of the chart) widened.  However, it widened not just because Italian yields rose but also because German 10-year Bund yields fell.  The drop in Bund yields has pushed U.S. yields lower.  This suggests some flight to safety within Europe as Italian investors flee to the safety of Germany.

Italian equities also fell, with bank share trading being halted for part of the day as price limits were hit.  The EUR also tumbled despite rising inflation.  The fear is that a crisis in Europe could lead to a breakup of the Eurozone.  This uncertainty is weighing on the currency this morning.

Further reflections on U.S. monetary policy: We are seeing two emerging trends from the Powell Fed.  First, Powell seems to be slowing the central bank’s drive for transparency and guidance.[2]  We have seen a steady increase in transparency over the years.  Until the late 1980s, changes in monetary policy were not announced.  The only rate discussion made available was the discount rate, but changes to that rate did not always coincide with changes in the fed funds target.  During the 1990s, Chair Greenspan began issuing statements when the FOMC made changes to the target.  Later in the decade, statements were issued with each meeting.  The statements themselves became longer with more information.  In 2011, press conferences at four meetings each year were introduced and the dots plot was initiated a year later.  Press conferences will now follow every meeting.

We have commented at length that this steady expansion of transparency is in line with American society.  We have become increasingly open about our lives, with many of us commenting at length on social media.  However, transparency isn’t without its costs.  One of the problems we have noted is that as the FOMC has become more open, financial markets have become increasingly comfortable with the path of policy and thus investors will take more risk than they otherwise would if they were uncertain about future monetary actions.  Chair Powell, in his latest press conference, told the media that they should focus less on the words and more on the data, indicating the path of policy could change if the data moves in unexpected directions.  In other words, watch the data, not the commentary.

The other item we think might be evolving is that Powell, a non-economist, is less likely to be blinded tied to any particular model of the economy.  In other words, he may not be a Phillips Curve adherent and thus may be less driven by theory.  This can be good or bad.  It’s good if the theory doesn’t work; that may be especially true with regard to the Phillips Curve.  It can be bad if Powell has no theory on how the economy works.  That could lead to “winging it.”  Thus, policy might be more volatile in the future.

The impact of trade: The Atlanta FRB GDPNow advance forecast for Q3 GDP turned lower due to the unexpected widening of the trade deficit, released yesterday. 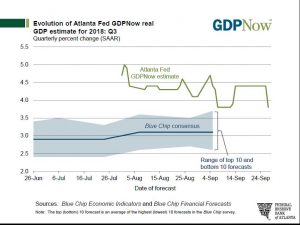 The trade data lowered the forecast from 4.4% to 3.8%.  Here is the path of the forecast by sector contributions to growth. 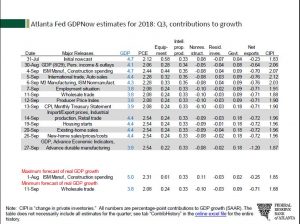 If there is an area where growth could come under pressure it would be trade.  Dollar strength and the relative growth rates favoring the U.S. will tend to widen the trade deficit and thus weaken the expansion.  Tariffs may reduce that effect but may also lift inflation.