[Posted: 9:30 AM EDT] Financial markets are mostly quiet today.  There is a modest reversal of recent trends as the dollar eases a bit, but long-duration bonds are continuing to weaken.  Here is what we are watching today:

Tax talk: The GOP leadership sketched out the tax plan.  Tax reductions tend to excite equity markets.  Since the late 1960s, there is a broad inverse correlation between the highest marginal tax rate and equity values. 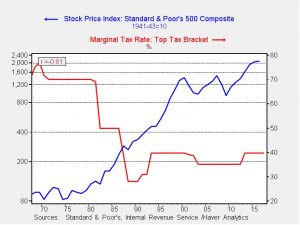 This chart comes with a plethora of caveats.  The rise in the S&P that correlates with the drop in tax rates is true as far as it goes, but a lot of other factors led to the bull market that developed, including falling inflation, a secular bull market in bonds, deregulation, globalization, etc.  In addition, the biggest positive market impact from tax cuts mostly comes from the early cuts, which were substantial.  Moving from 39% to 35% on the highest marginal rate is nothing compared to moving from 70% to 30%.  Still, it makes sense that the equity markets have a positive reaction to the thought of tax cuts, especially corporate tax cuts, which will boost after-tax net income for corporations.  As we noted yesterday, we are not going to invest a lot of time and effort into discussing tax changes until we get closer to a final draft.  As a note of caution, the politics of tax reform are devilish because there are winners and losers and the latter try to prevent changes from occurring.  There are reports that the president is cool to the proposal.[1]  Senator Hatch (R-UT) has indicated he may draft his own tax plan.  Senator Corker has suggested that taxes are much harder than health care.[2]  It’s going to take months for anything to happen on taxes and what eventually emerges may or may not be favorable.

U.S. to send “strategic assets” to South Korea: The WP reported[3] that the U.S. is sending strategic assets to South Korea, although what exactly is being sent wasn’t noted.  We would expect strategic bombers and attack submarines capable of launching missiles to be sent.  Of course, sending nuclear weapons would be a significant signal to the North.

Navarro demoted: Peter Navarro, Director of Trade and Industrial Policy, now reports to David Cohn instead of directly to the president.  This is a win for the establishment wing of the GOP.

Iraq threatens the Kurds: The official results of the Kurdish referendum showed over 92% voted for independence.  Baghdad is threatening to invade the Kurdish region and has shut down Kurdish airspace in response.  Although we doubt an invasion is imminent, the threat of military action in the northern oil fields is lifting oil prices this morning.  The Kurdish situation is quite complicated; we expect all the surrounding nations to try to use the Iraqi Kurds to their own benefit.  On the one hand, playing the regional powers off each other increases the chances that a Kurdistan state will emerge.  On the other, if a state does develop, it will be wholly dependent upon the sponsoring power.  We continue to watch Turkey closely.

Catalonia votes (maybe): Catalonia is promising to hold a referendum on independence on Sunday.  The national government is threatening to use the national militia to prevent voting from occurring.  The Rajoy government is making a hash of this vote; polls suggest most Catalonians want to remain in Spain so allowing the vote to occur would be a politically savvy choice.  By acting in such a ham-fisted manner, Rajoy is boosting tensions.  Europe has a number of simmering independence movements which could undermine the Eurozone over time.

Japan’s snap elections: PM Abe dissolved parliament before the Oct. 22 elections in Japan.  The PM is hoping to solidify his already two-thirds majority because the opposition socialists are in deep disarray.  However, a surprise challenger has emerged as Tokyo Governor Yuriko Koike has formed a party called the “Party of Hope” to challenge the PM.  The Democratic Party, the official opposition party, has indicated it won’t compete in the Oct. 22 vote, allowing its candidates to run in the new party.  If she were to win, Koike would be the first female PM in Japanese history.  It’s not clear how Koike’s policies would differ from Abe’s, but any change from Abe might end the Abenomics experiment.  A stronger JPY may result.

This chart shows current crude oil inventories, both over the long term and the last decade.  We have added the estimated level of lease stocks to maintain the consistency of the data.  As the chart shows, inventories remain historically high but have declined.  The impact of Hurricane Harvey is starting to diminish as refinery operations recover.  We also note the SPR fell by 0.8 mb, meaning the total draw was 2.6 mb.

As the seasonal chart below shows, inventories fell this week.  It appears we have started the inventory rebuild period sooner than normal this year due to the hurricane.  The key will be the path of refinery operations.

Refinery operations have recovered strongly; history suggests that the trough in maintenance ends about mid-October.  Although we could see a pullback over the next couple of weeks, if operations remain elevated it would be supportive for crude oil demand and prices. 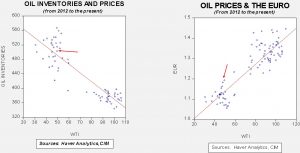 Based on inventories alone, oil prices are undervalued with the fair value price of $50.62.  Meanwhile, the EUR/WTI model generates a fair value of $66.61.  Together (which is a more sound methodology), fair value is $61.20, meaning that current prices are well below fair value.  If the Fed does continue to tighten policy and the dollar recovers, it will tend to undermine oil prices, although we would note that oil has been underperforming the dollar’s weakness.  Thus, the adverse impact of a stronger dollar on oil should not be material.