Hurray for Friday!  It has been a tumultuous week as we approach the end of Q3.  Markets are generally quiet this morning.  U.S. economic data was a bit soft (see below).  There are two elections over the weekend, in Afghanistan and Austria.  The media is fully focused on the impeachment issue.  Here is what we are watching this morning:

BREAKING: Oil falls on reports that the U.S. has offered to remove all sanctions in exchange for talks.  Reports have not been confirmed by the White House.

Releasing the doves:  Michael Saunders, one of the more hawkish members of the Bank of England, said today that the BOE may need to reduce rates even if a no-deal Brexit is avoided because growth has been dampened due to the turmoil caused by the issue.  The GBP fell on the news.

Elections:  In the midst of instability, Afghanistan is holding elections this weekend. Islamic State (IS) has become increasingly active in the country, not only attacking the official state but also the Taliban.  According to reports, IS and al Qaeda officials have been in talks as well.  Overall, it is hard to see how elections can be conducted in such an atmosphere.  The sitting government, fearing the U.S. wants to pull out of the country and make a deal with the Taliban, likely wants a mandate that an election victory would grant it.  Look for terrorist acts and general insecurity this weekend.

Meanwhile, in Austria, Sebastian Kurz is poised to return to power as he leads the center-right to a likely win…but not a majority.  Kurz will need to build a coalition; polls suggest his People’s Party will gain about 35% of the vote.  He could join with the center-left Social Democrats to form a unity government, or the populist-right Freedom Party to create a conservative coalition.  Thus, the election itself has little drama, but the post-election coalition decision will be the real event.

Labor unrest:  The GM strike continues into its 11th day, but it does appear that negotiations are coming to a close; however, the issues still needing to be resolved are the most difficult, so it would not be a surprise to see talks extend into next week.  Meanwhile, the Chicago Teachers Union has authorized a strike.  A teachers union strike in a major city tends to bring serious disruption as students (about 300k) have nowhere to go during the day.

Falling confidence:  Economic confidence in the Eurozone fell to over four-year lows as the industrial sector slows. 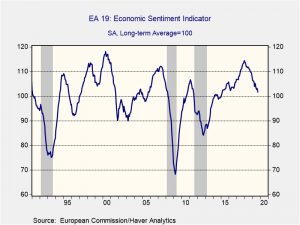 Although not necessarily at recession levels, the decline is pronounced and supports easier ECB policy.  The EUR is weaker on the news.

China trade:  China continues to buy U.S. agricultural goods, framing the purchases as a confidence-building measure rather than the fulfillment of a desperate need.  High-level talks are scheduled for October 10.

Impeachment talk:  Reflecting the many lines of inquiry that could be touched off by the White House whistleblower complaint, Kremlin spokesman Dmitry Peskov said Russia hopes the United States will not release the transcripts of calls between President Trump and President Putin.

Odds and ends:  The U.S. is sending a Patriot missile battery and 200 troops to Saudi Arabia.  Former VP Biden is proposing a financial transactions tax, likely in response to proposed wealth taxes from other Democratic party presidential candidates.  The German Bundestag voted to open talks with Albania and North Macedonia on EU entry.  The Census Bureau reports that large U.S. cities saw a decline in younger residents as Millennials and Gen-X exit cities for less expensive housing markets.  The Indonesian government is now facing a wave of student-led demonstrations.  The protests are targeted mostly against a new law being pushed by President Widodo’s conservative Islamic supporters, criminally banning sex and cohabitation outside of marriage.  In Egypt, the outbreak of political and anti-corruption protests that broke out last week look set to continue as protest leaders are calling for further demonstrations today.