[Posted: 9:30 AM EDT] Financial markets are mostly steady this morning (although the dollar is stronger) after a rather large number of economic releases this morning.  The FOMC meeting ended as expected, with no major surprises.  Economics will take a back seat to politics on this Thursday.  Here is what we are watching today:

Politics: There are two major events in Washington today.  Deputy AG Rosenstein is scheduled to go to the White House today (although we would not be surprised to see the meeting postponed); we are assuming Rosenstein has decided he would rather be fired than resign and we don’t expect Trump to do that until after the midterms.  The second event, of course, is the Kavanaugh hearing.  We haven’t said a lot about this because it hasn’t had much of a market impact.  However, that doesn’t mean we aren’t paying attention.  There is a lot going on here.  From our perspective, one of the key elements that has been overlooked is that our constitution was written for a decentralized republic that was not in the business of hegemony.  But, as our country took to the role, we quickly found that Congress, designed as a deliberative body, moved too slowly for a superpower.  Thus, power has steadily shifted from the legislative to the executive branch.  As a result, presidents have much more power than the founders envisioned.

The strain of providing global public goods to the world has distorted our economy and left us with a dilemma—we can have low inflation, but only at the cost of rising inequality.  Or, we can reduce inequality at the risk of rising price levels.  It may be possible to eliminate this dilemma but, to date, no one has come up with a feasible economic and political solution that works.  Therefore, widespread disaffection with how “the system” works has led to a very fluid political situation that is currently leading to adjusting coalitions.  As the legislature struggles, agents looking to create change have turned to the courts to make policy.  And so, the Supreme Court, created to adjudicate constitutional matters, has become embroiled in policy issues that should have been decided in Congress.  When the founders created a system of lifetime appointments, the goal was to create a body that would rationally decide if a law was in line with the constitution; now, we have created a body that resembles lifetime legislators.

With this development, court appointments have moved from a cool analysis of the legal competence of the nominee to a full-contact political fight.  Conditions could become much worse.  Watching the arguments from partisan pundits begins to take on the tone of two brothers arguing their case before parents (“he started it…did not!”).  In our opinion, the beginning of this current predicament was the Bork nomination, but now we have reached a point where the opposition party may decide that changing the court is their best option.  We would not be surprised to see term limits introduced and increases in the number of justices.

For the markets, this is important because policy is likely to change more rapidly than it has in the past.  The country and financial markets have been fortunate to have enjoyed a series of long business cycles.  After suffering four recessions from 1970 through 1982, we have seen only three since (although, admittedly, the last one was a doozy).  Rapidly changing policy, including on regulation and taxes, will make investing decisions difficult and likely lead to shorter business cycles and shorter equity cycles, too.

FOMC meeting recap: The statement did what we expected—the word “accommodative” was removed but in the press conference Chair Powell quickly indicated that we shouldn’t read too much into the change.  In other words, as we noted yesterday, this change likely has more to do with reducing forward guidance and is less about achieving neutrality.  The press conference itself was a meandering affair, flipping between suggesting more hikes to come and then reversing to when cuts will commence.  This uncertainty is to be expected.  We are approaching the point where policy has become less easy and thus we are closer to shifts in policy than we were before.

Here are some charts that detail what we know.  Here are the “dots.” 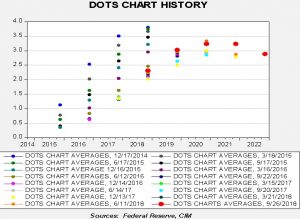 The red dots represent yesterday’s meeting.  The changes from June are not significant and probably reflect the votes of the new vice chair Clarida.  The dots signal at least two hikes in 2019, to 3.00% to a potential of 3.25%.  The terminal rate is forecast at around 3.25%, and rates are expected to come down in 2020.

Market projections for rates continue to suggest the path is moving higher.  Fed funds futures are putting a high probability on a December rate hike.

The odds for a December hike are around 75%.

The implied LIBOR rate is up to 3.185%, and the spread between this rate and the Fed’s target is suggesting a terminal rate of 3.25% to 3.50%.  Of course, the difficult question is when does the rate increase enough to hurt the economy?  The chart on the right offers the best clue; when the implied LIBOR rate intersects with the fed funds target, further rate hikes risk recession.  Thus, we are about 100 bps from “trouble.”

Although the removal of the word accommodative was initially taken as dovish, we really don’t see it that way.  In yesterday’s report, we noted that some of the governors and regional bank presidents are adjusting positions.  The hawkish shift from Governor Brainard is of particular interest.  The fear, of course, is that the FOMC overtightens.  We are not there yet but we are also now entering a rate level where each increase could begin to adversely affect the economy.  Today’s market action suggests a more hawkish concern.

And, finally, the president did object to the latest rate hike.  Although his comments didn’t create much of a stir, we are still watching closely to see if he begins to increase pressure on the Fed to adjust policy.  We really haven’t seen anything like this since Nixon, but if the U.S. government’s goal is reflation then a compliant Fed is a necessary component.

Italian job: Italy is facing a deadline for its budget today; the official word is that the deficit is likely to come in around 2.4% of GDP or less.  However, elements within the populist coalition are making noise about increased spending and thus we could see Italian debt pressure develop if the final budget comes in anywhere north of 2.4%.

China: There were a couple of news items on China that caught our attention.  First, President Trump accused China of meddling in U.S. elections.[1]  There was no evidence offered to substantiate the claim, and China has indicated it is not true.[2]  It is possible there is classified information that shows Chinese interference.  Or, he could be referencing ads taken out recently in the Des Moines Register indicating that China was planning on buying South American soybeans due to the administration’s trade policy.[3]  Tensions with China are clearly increasing; we would not be shocked by evidence of Chinese interference but the CPC should realize that Trump represents a trend in U.S./Chinese relations, not a one-off.  The second issue is a growing row between Beijing and Stockholm.  According to reports, Chinese tourists arrived a day early at a Swedish hotel and decided to decamp in the lobby.  When the proprietors objected to this plan, a shouting match ensued and security forces became involved.  A Swedish media outlet made a satirical video skit that has been taken offensively by Chinese officials.[4]  China has had tense relations with Sweden due to the Nobel organization giving awards to ostracized Chinese artists.  We don’t know if anything more will come from this,[5] but the level of anger is surprisingly high.

This chart shows current crude oil inventories, both over the long term and the last decade.  We have added the estimated level of lease stocks to maintain the consistency of the data.  As the chart shows, inventories remain historically high but have declined significantly since March 2017.  We would consider the overhang closed if stocks fall under 400 mb.  Refinery utilization fell 5.0% to 90.4% last week.  Oil production rose 0.1 mbpd to 11.1 mbpd.  Exports increased, rising 0.2 mbpd, while imports fell 0.2 mbpd.  The rise in stockpiles was a function of falling refining demand.

As the seasonal chart below shows, inventories have reached the end of the seasonal withdrawal period.  We should begin to see inventories rise in the coming weeks as refinery operations decline for autumn maintenance. 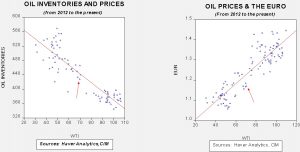 Based on inventories alone, oil prices are below fair value price at $75.35.  Meanwhile, the EUR/WTI model generates a fair value of $60.81.  Together (which is a more sound methodology), fair value is $65.78, meaning that current prices are well above fair value.  The most bearish factor for oil is dollar strength, while the decline in inventories this driving season has been a significant supportive factor.

We note that oil prices lifted this morning on reports that DOE Secretary Perry indicated the U.S. would not release oil from the SPR to lower oil prices.  Although this news is bullish if true, the chance that the president could shift quickly on this policy isn’t trivial.