Good Morning.  Global equity markets are under pressure this morning on sentiment concerns.    Here is what we are watching:

A volatile day:  Yesterday was a volatile day in the financial markets as two issues dominated. 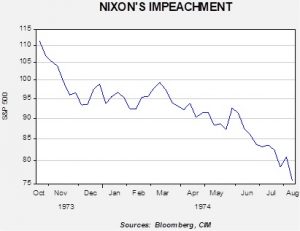 This chart shows the weekly S&P 500 Friday close.  We measure the Nixon impeachment from October 9, 1973, the Friday before the “Saturday Night Massacre,” until his resignation.  The Nixon impeachment event (it’s important to remember that he resigned before the articles of impeachment were sent to the Senate) occurred in a major bear market for equities.  Although the political actions likely played a role in the drop, it’s important to note that the impeachment nearly coincided with a recession (the downturn began in November 1973 and continued into March 1975) and oil prices rose 235% from October 1973 to January 1974.  Thus, the impeachment probably played a role in the market decline, but other factors were also important. 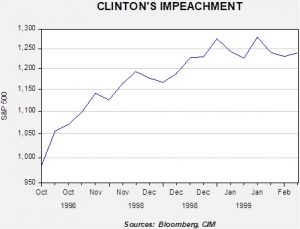 Same data as above.  We time Clinton’s impeachment from the House of Representatives vote to conduct an impeachment inquiry until the president was acquitted by the Senate.  The economic environment was generally positive, and equity markets were in a strong bull market.  We do note that equities had declined during impeachment due to the collapse of Long-Term Capital Management, and the Russian debt default.  Thus, some of the gain is exaggerated. Still, this shows that if economic and market conditions are favorable, the bearish impact of impeachment is probably muted.

So, what should we think about with this impeachment issue?  Here are our preliminary thoughts:

Boris:  PM Johnson returns to the U.K. today to face a hostile Parliament.  The Supreme Court ruling was a serious blow.  Under normal circumstances, the poor management that Johnson has delivered (lost his majority, had his own brother leave the party, humiliated by Luxembourg, rebuked by the Supreme Court) would have led to his ouster by now.  However, these are not normal times, to say the least.  What happens now?  In mid-October, the EU has meetings where the U.K. either must have a plan to leave the EU or, based on recent legislation, Johnson must ask for an extension to the end of January.  Assuming that there is no plan to offer (and it doesn’t look likely), we will probably see an extension and new elections.  At this point, the most likely outcome from the elections is a hung Parliament, with the potential for a caretaker government and perhaps a second referendum.  However, the odds of a hard Brexit are less likely.

Wealth Tax: Presidential candidate Bernie Sanders has joined Elizabeth Warren in endorsing a tax on assets for individuals that have a net worth of more than $16 million, and married couples with a net worth of over $32 million. The revenue for the proposed tax would be used to promote government programs such as universal healthcare. In addition to its appeal to labor, the idea has become increasingly popular with members of the capital class, with Bill Gates stating that he “wouldn’t be against the tax.” Moreover, although a wealth tax makes conceptual sense, it doesn’t appear to be all that practical. The primary issue is that the value of one’s assets is somewhat subjective; therefore, there is a strong incentive for people to undervalue their assets on their tax returns.  Even though the government could just send auditors to value these assets, it would likely prove overly burdensome. Another proposed solution to the problem would be for the government to have the right to buy assets at the listed price, but even that seems burdensome. However, as we have mentioned in the past, this wealth tax is just another example of the country moving away from an efficiency cycle, and into an equity cycle.  We have doubts that a wealth tax will ever be enacted; other nations that have tried to implement them tended to abandon the effort because of the difficulty in processing the levy.  However, the mere threat tends to have a dampening effect on asset prices.

Magnets:  The U.S. is importing rare earth magnets at the fastest pace since 2016.  Most likely, firms are concerned that the supply will be curtailed if the U.S. and China can’t reach a trade agreement, so they are stockpiling the materials.