Happy Monday!  It’s the Autumnal Equinox today.  For sports fans, it’s a wonderful time of year.  Baseball playoffs are being set.  The NFL is in full swing, and college football is operating too.  The NHL preseason has begun. The GM strike rolls into its second week.   Here is what we are watching this morning:

The U.N. General Assembly meetings begin:  Although we doubt anything of substance will emerge from these meetings, Iranian leaders will be in town and discussions about climate change are on the agenda.  Ukraine’s president will also attend.  The U.S. is likely to try to move the U.N. to criticize Iran’s recent attack on Saudi Arabia, but we are not optimistic on this front.  We are monitoring the recent whistleblower accusations, and the widespread youth protests for climate change legislation.  However, we haven’t moved beyond monitoring because, so far, these issues have not affected financial markets.  Nevertheless, impeachment proceedings could dampen investor confidence (or not…it might ease trade tensions).  On climate change, we do expect that action will be taken at some point; our focus now is on how the costs of the legislation will be allocated.

Weak Eurozone economy:  The Eurozone PMI data (see below) came in soft, at 50.4, just above the 50 expansion line.  Financial markets moved from risk-on to risk-off on the news.  There is great concern that the Eurozone will drag the global economy into further weakness.

Saudi Arabia and oil:  Oil prices declined in the wake of the Eurozone PMI data despite news that repairs to the Saudi infrastructure will likely take much longer than expected, according to private contractors hired to assist in recovery efforts.  Worries about demand, caused by slowing global growth, are keeping oil prices from rising on the bullish supply news.

Trade:  On Friday, President Trump’s comments that he didn’t want a partial deal with China, that he didn’t need a deal for re-election and reports that a Chinese trade delegation called off visits to farms led to a hard selloff in equities.  It turns out that the U.S. asked the Chinese to cancel their visit, worried about the public framing of the tour.  Trade uncertainty may be the most important issue that the financial markets are dealing with.  Regular readers are familiar with our charts that show U.S. retail money market balances have been ballooning over the past 18 months.  The last time we had such an increase in these balances, was into the teeth of the financial crisis.  In general, money market funds are generally utilized by higher income households, so the increase in these balances is likely (a) reducing buying power for equities and (b) represents potential liquidity that could propel equities to significantly higher levels.  We think the chart below may explain the money market accumulation. 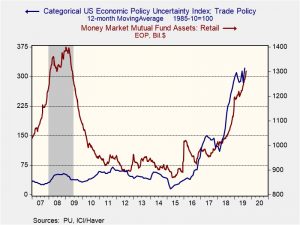 The blue line (left scale) is the U.S. Economic Policy Uncertainty Index for trade policy.  The index is created by noting the mentions of trade policy and trade issues in the media.  When such words are mentioned with greater frequency, the index rises.  We have smoothed the day with a 12-month moving average.  Note that the increase in the uncertainty index closely matches the increase in money market balances.  It appears that concerns about trade and deglobalization have raised investor fears and triggered a desire to build cash balances.  We note that the WSJ is reporting on the rise in household saving, especially among wealthier households.  Although tax cuts probably played a role in the saving accumulation, the above chart suggests that worries about trade are affecting saving behavior as well.  What this data tells us is (a) the trade issue has likely been the major factor behind the current sideways equity market and (b) a resolution of the trade deal could bring these liquidity balances back to the equity market, triggering a very strong rally.  At this juncture, we don’t see a reversal in the trade situation anytime soon; if anything, deglobalization is one of the few bipartisan positions in our fractured politics.  However, if there is a cooling of tensions, it could be quite bullish for equities.

The repo issue:  It does appear that the Fed has addressed the immediate problem of spiking repo rates with a series of monetary injections.  However, the NY FRB is now working to figure out why this happened in the first place.  Apparently, bank officials are looking at the problem of concentrated bank reserves but seem to believe that the concentration is occurring with the small banks, not the larger ones.

Iran:  The Iranian government said it will release the British-flagged oil tanker Stena Impero, which it seized in July after Gibraltar’s seizure of an Iranian tanker.  Since the Iranian tanker had long since been released, the release of the British ship right after last week’s attack on Saudi oil facilities suggests the move is meant to confuse Iran’s adversaries and obfuscate its true intentions.

Egypt:  Protestors rallied against President Al Sisi over the weekend.  Although the number of protestors was only in the hundreds, it was Egypt’s first significant bout of demonstrations in years, and the first to openly call for Al Sisi’s ouster over corruption charges.  Coupled with Iranian threats and inconclusive Israeli elections, unrest in Egypt would help bolster oil prices.