[Posted: 9:30 AM EDT] This morning’s big news comes from OPEC, where Reuters is reporting that Saudi Arabia offered a production cut if Iran would freeze production.  We do not know how much the kingdom has offered to reduce its output, but Iran did tell Russian media that it would need Saudi Arabia to “slash” its production.  Current Saudi production is 10.6 mbpd, near record highs, while Iranian output is 3.6 mbpd.  Iran has indicated it wants to raise output to 4.0 mbpd; we believe that will probably be close to its sustainable output level.

Although we obviously don’t have all the details, we can develop a reasonable set of deal parameters.  We suspect Saudi Arabia wants to see Iran hold production at current levels and will not grant it the additional 0.4 mbpd of market share.  Iran would probably want Saudi Arabia to cut output by more than 0.4 mbpd.  We doubt the kingdom would meet this demand.  We note that about 0.8 mbpd has come to global markets due to production recoveries in Nigeria and Libya, and from new output by Russia.  A Saudi/Iranian agreement would force both to cede market share, something we doubt either would be comfortable doing.

So, what is Saudi Arabia doing?  It is quite possible that it is trying to shift the blame for weak prices to Iran.  If the kingdom offers a token cut, less than 0.4 mbpd, Iran will almost certainly reject a freeze.  The Saudis will say that they did “try” to work out a deal with Iran but, due to Iranian intransigence, it failed.  If no deal emerges, oil prices will likely ease toward the $40 per barrel level.  However, we don’t expect prices to fall much below $40 in a worst case scenario.

The FOMC’s decision has been well discussed but we do want to offer a reflection on the growing dissention developing at the FOMC.  Three presidents dissented from the steady policy decision, while three “dots” suggest no rate hike this year.  There have only been five other instances in the past three decades when we had three dissents.  If a rate hike does occur, it is possible that we will have three dissents again; however, we suspect that at least two of those calling for no change this year are governors, probably Brainard and Tarullo.  The last time we have two governor dissents was in 1993.

Fed chairs try to maintain a consensus; large numbers of dissents raise fears in the financial markets of policy instability.  So far, the financial markets have taken the policy signals as supportive as the dots chart continues to show a steady slide in the terminal rate for the fed funds target.  Given the softening data recently, even a December hike isn’t certain.

Here is the latest Q3 GDP estimate from the Atlanta FRB. 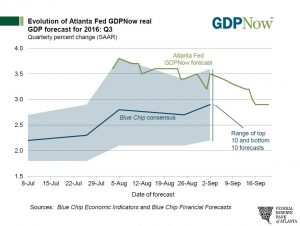 From the September peak, the estimate has dropped 0.55%. 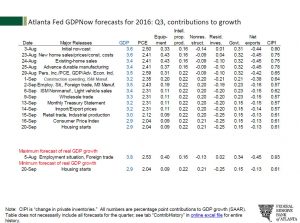 Looking at the data, since September 2, 39 bps of the 55 bps drop have come from lower consumption estimates, 11 bps have come from lower investment and 8 bps have come from lower government spending, while net exports have added 3 bps.  Overall, Q3 growth looks ok, but the momentum is slowing; election worries could make Q4 data soften further.  In this environment, if Yellen does want to raise rates with a divided Fed, she will likely be unable to sway the doves on the board.  Rising dissent will, at some point, become a risk factor for the financial markets.