Good morning.  It’s Monday and there is a lot going on.  Equity markets are down sharply across the world; we suspect fears of political turmoil are adversely affecting financial markets.  We lead off with comments surrounding the death of Justice Ruth Bader Ginsburg and the political firestorm her passing has triggered.  China news is next, with the latest on TikTok.  We recap economic news, including questions about the unemployment claims data, a resignation at the NY FRB and a look at housing.  The pandemic update follows.  We close with world news.  Let’s get to the details:

Ginsburg and the election:  On Friday, Supreme Court Justice Ruth Bader Ginsburg died from cancer.  The justice was 87 and part of the court’s liberal minority.  Her passing has accentuated an already tense electoral season.  There will be a lot written in the media in the coming weeks, but here is our initial take: 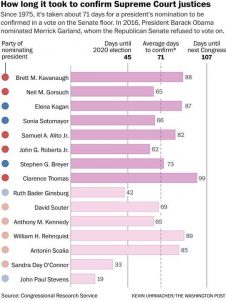 Ricin:  There are reports that envelopes of ricin, a poison derived from castor beans, were mailed to the White House and local law enforcement offices in Texas.  The letters were sent from Canada, and a woman has been arrested.

COVID-19:  The number of reported cases is 31,089,558 with 961,273 deaths and 21,272,259 recoveries.  In the U.S., there are 6,812,332 confirmed cases with 199,513 deaths and 2,590,671 recoveries.  For illustration purposes, the FT has created an interactive chart that allows one to compare cases across nations using similar scaling metrics.  The FT has also issued an economic tracker that looks across countries with high frequency data on various factors.

The U.S. is reinstituting sanctions on Iran.  The snapback provisions were initially designed to include several other nations, but this time around, the U.S. is mostly going alone, reducing some of the effectiveness.  Specifically, look for China and Russia to sell weapons to Tehran.