[Posted: 9:30 AM EDT] Financial markets are consolidating after yesterday’s Fed meeting, which we will discuss below.  The key takeaway is the dollar’s rally.  In the Asset Allocation Weekly published on Friday (see gray section below), we analyzed the case for a weaker dollar; it rests on the fact that the dollar is already overvalued as the currency markets discounted tighter Fed policy much earlier than other markets.  Still, it appears the Fed’s decisions yesterday did stall the dollar’s recent weakness.  Here is what we are following this morning:

Fed recap: The financial markets took a hawkish tone to the FOMC decision.  Market expectations had been for a tradeoff of balance sheet reduction in place of rate hikes.  In other words, Chair Yellen would placate the hawks on the committee by reducing the balance sheet instead.  However, that isn’t what was offered.  Instead, the FOMC has mostly maintained its plan to raise rates. 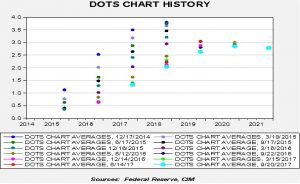 Yesterday’s average estimates are shown in the large light blue dots.  The forecasts from the FOMC members are mostly consistent with June.  In fact, they are a bit dovish in the out years.  However, market expectations had been shifting to no change in rates this year.  That estimation shifted sharply in light of the FOMC report.  Looking at the chart below, the black line shows the probability of a hike from fed funds futures relative to no change, shown in blue.  Note that expectations of a hike rose initially after the last meeting then steadily edged lower.  We have been seeing a steady shift in expectations toward a hike since early September and it jumped to over 67% in light of yesterday’s comments.  We will see if the June/September pattern repeats itself, or if the expectations hold for a hike in December.

The other issue worth noting is that inflation expectations haven’t changed.  The FOMC is still projecting a core PCE of nearly 2.0% by 2019 and throughout the rest of the forecast period.  Current core PCE is 1.4%.  The projected rate hikes with 2% inflation will bring the real rate to zero by the end of next year and positive thereafter.  However, if core PCE does not increase as expected and rates continue to rise, the projected rate of real fed funds will turn quite positive.  The red line on the chart below shows the projected path of real fed funds using the FOMC assumptions.  Usually an upward move of 400 bps from the low in the cycle triggers a recession.  Given that the low was established in early 2012 at near -2.0%, the projected path would put us dangerously close to recession territory.  Of course, the FOMC’s projection of inflation may end up being correct and the red line is too high by 40 bps; if that occurs, the concern is lessened.  However, we have little confidence that the Fed’s projections of inflation will be right as the track record is less than stellar. 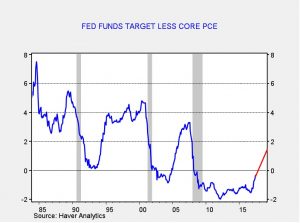 An additional concern is the balance sheet shrinkage.  Although the jury remains out as to the actual impact of QE, the risks of a policy mistake rise if reducing the balance sheet ends up having the effect of tightening policy.  As we have seen in the above dots chart, promising is one thing—doing is another.  The FOMC may not tighten as much as expected; in fact, in 2014, the terminal rate was expected to reach 4%.  That expectation has clearly changed.  But, based on what we saw yesterday, the path of policy tightening still appears to be on track.

Other central banks demur: Reserve Bank of Australia (RBA) Governor Lowe indicated that his central bank is not necessarily prepared to follow the Fed in raising rates.  BOJ Governor Kuroda indicated the same thing.  In general, we have seen veiled “beggar thy neighbor” currency policies throughout the world since 2008.  Although no central banker wants to directly say his/her nation is deliberately trying to weaken a nation’s currency, they also don’t seem to welcome depreciation.  In light of recent dollar weakness, it appears that other central bankers are likely to avoid the hint of hawkishness that would prevent their currencies from weakening.  In later parts of Lowe’s comments, he did warn that rates would need to rise, but that sentiment was lost when he indicated a tightening Fed wouldn’t necessarily trigger tightening from the RBA.

China downgraded: S&P downgraded China’s sovereign debt to A+ from AA-, five months after Moody’s cut China’s rating to A1 from Aa3.  Both cited high debt levels for the downgrades and changed their outlooks to stable after the adjustments.  In reality, China’s sovereign debt is not widely held outside of China so this downgrade won’t mean anything significant to interest rates.  Nevertheless, the downgrade does come at an inopportune time for General Secretary Xi with the CPC Congress next month.

SEC hacked: The SEC reported that its EDGAR reporting system was hacked last year and information gained may have been used for insider trading.  Essentially, hackers would have gotten advance information of official filings before the public, which would have been quite valuable.

South Korea at odds: President Trump, PM Abe and South Korean President Moon are expected to meet on the sidelines at the UN General Assembly this week.  Trump and Abe have been pressing for military action against North Korea.  Moon does not want this to happen.  Essentially, Moon fears that South Korea would face the brunt of a retaliatory attack from North Korea if the U.S. tries to militarily neutralize Kim’s nuclear and missile program.  Moon is probably correct.  North Korea has massed artillery along the 38° parallel and would likely strike Seoul with a devastating conventional barrage.  Worse yet, North Korea has a large arsenal of chemical weapons that would cause massive casualties.  Thus, South Korea is more willing to live with a nuclear-armed North Korea and wants its own nuclear weapons to act as a deterrent.  This solution is much less attractive to the U.S. and Japan.  The latter two are not threatened by North Korea’s conventional forces but are at risk to nuclear weapons on missiles.  We don’t know to what lengths Moon would go to prevent an American attack on Pyongyang; would he not allow U.S. troops in South Korea to engage in a conflict, or close South Korean airspace and sea boundaries to U.S. military assets?  It is hard to see how the U.S. could conduct effective operations against the North without South Korean cooperation.  At the same time, it is hard to see how President Trump would stand down and not protect the U.S. from a rogue nuclear power just because South Korea objects.  We note the White House has announced the president will make a statement on North Korea this afternoon.  We will await his comments.

This chart shows current crude oil inventories, both over the long term and the last decade.  We have added the estimated level of lease stocks to maintain the consistency of the data.  As the chart shows, inventories remain historically high but have declined.  Hurricane Harvey affected the energy market data again this week; the effects should continue for several more weeks.

As the seasonal chart below shows, inventories did turn higher again this week, affected by the aforementioned hurricane.  We have started the inventory rebuild period sooner than normal this year.  Oil imports continue to recover, rising 0.7 mbpd, and domestic oil production rose by 0.157 mbpd, adding supply to the market.  However, refinery capacity utilization jumped 5.5% to 83.2%, an increase in consumption of 1.0 mbpd.  If this refinery recovery continues, the rapid increase in oil stockpiles should begin to dissipate. 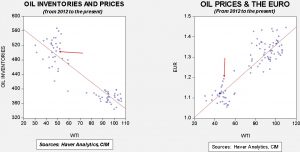 Based on inventories alone, oil prices are undervalued with the fair value price of $50.02.  Meanwhile, the EUR/WTI model generates a fair value of $67.10.  Together (which is a more sound methodology), fair value is $61.30, meaning that current prices are well below fair value.  If the Fed does continue to tighten policy and the dollar recovers, it will tend to undermine oil prices, although we would note that oil has been underperforming the dollar’s weakness.  Thus, the adverse impact of a stronger dollar on oil should not be material.

OPEC meets: The cartel is scheduled to meet tomorrow and is considering extending production cuts well into next year.  Saudi Arabia has already announced it will delay its IPO of Saudi Aramco until 2019, likely because low oil prices will reduce the valuation of the company.  We expect the cartel to extend cuts, but would also anticipate less compliance as time passes.