[Posted: 9:30 AM EDT] It’s another quiet morning.  Here is what we are watching today:

More on Brexit: Yesterday, we covered some of the simmering issues on Brexit.  Here are some of the day-to-day factors we are watching.  The EU members, sans the U.K., are meeting in Salzburg, Austria to discuss exit issues.  These are informal meetings and probably won’t go anywhere.  One reason is that the Tories hold their party conference from September 30 to October 3 and PM May probably doesn’t want to look as if she is in compromise mode before her party meets.  She already torpedoed the idea of a customs border on the Irish Sea that would leave Northern Ireland in the EU for trade purposes.[1]  We actually don’t think she is all that opposed to the idea but can’t really accept it before the party conference.  There is growing talk of a “blind Brexit” where the U.K. separates from the EU but continues to negotiate terms after separation.[2]  Such an outcome is risky because it isn’t clear how much leverage the U.K. will have to negotiate once it is outside the EU (which will occur in about six months).

Trade: A few interesting storylines are starting to develop.  First, there has been a sharp increase in U.S. soybean exports to the EU.  For this crop year, they are up a whopping 133.3%, with American farmers more than doubling their share of the EU market, to 52.3% from 24.8% last year.  Canada is also increasing its sales to Europe.  South America is seeing falling sales, most likely because their beans are being diverted to China.[3]  So, we are already seeing rather dramatic shifts in trade patterns due to the administration’s tariff policy.  Second, we note that China announced tariff reductions on other nation’s imports, likely in a bid to keep costs down but also to bolster non-U.S. trade ties.[4]  Third, we also note that other nations are taking steps to grab market share from China that is potentially being lost to new tariffs.[5]  Mexico is the nation that likely has the best “inside track.”  And, finally, in another interesting twist, the EU has launched an initiative designed to counter China’s “one belt, one road” project.  The plan is designed to offer infrastructure investment in countries from the Middle East to the Far East.[6]

A new governor: In a surprise move, the Trump administration nominated Nellie Liang[7] to the position of Fed governor.  A perusal of Liang’s background suggests her expertise is in finance and financial markets.  Until proven otherwise, we will expect her to follow the chair on policy and thus we give her the same “hawk/dove” score. 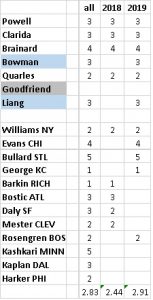 We have put Bowman and Liang in blue on our roster because they haven’t been confirmed yet.  Goodfriend has not had a confirmation vote likely because his performance at the first testimony was so controversial.  His name hasn’t been withdrawn but we would not be surprised if he is replaced given his hawkish tendencies.  We have also added the voting roster for 2019.  It will be a more dovish FOMC next year.

Götterdämmerung for Merkel?  Chancellor Merkel has been seen as a strong leader and an effective political operative.  She famously undercut her mentor, Helmut Kohl, ending his political career.  She forced the end of nuclear power in Germany over strong objections from industry.  During the European debt crisis, she did offer finanical support but only in exchagne for deep austerity.  But, her stance on immigration appears to have exhausted her political capital.  In the last election, her CDU/CSU coalition was only able to remain in power by building another grand coaltion with the SDU.  A recent event shows further evidence of Merkel’s declining power.  Merkel wanted the head of Germany’s domestic spy service fired for comments he made suggesting that the threat from right-wing populists was not all that significant.  Hans-Georg Maaßen, the head of this body, was instead promoted by Interior Minister Horst Seehofer, a member of the CSU and a frequent critic of Merkel’s immigration policy.  The fact that Merkel could not remove Maaßen from office suggests her power has diminished significantly.  An end to Merkel’s career will raise concerns about the path of Germany’s future policy and may bring some weakness to the EUR.

This chart shows current crude oil inventories, both over the long term and the last decade.  We have added the estimated level of lease stocks to maintain the consistency of the data.  As the chart shows, inventories remain historically high but have declined significantly since March 2017.  We would consider the overhang closed if stocks fall under 400 mb.  Refinery utilization fell 2.2% to 95.4% last week.  Oil production rose 0.1 mbpd to 11.0 mbpd.  Imports and exports both increased, with exports rising 0.5 mbpd while imports rose 0.4 mbpd.  The rise in imports and consistent demand led to the decline in stockpiles.

As the seasonal chart below shows, inventories have reached the end of the seasonal withdrawal period.  We should begin to see inventories rise in the coming weeks as refinery operations decline for autumn maintenance. 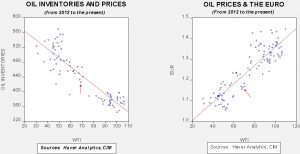 Based on inventories alone, oil prices are below fair value price at $75.96.  Meanwhile, the EUR/WTI model generates a fair value of $60.54.  Together (which is a more sound methodology), fair value is $65.39, meaning that current prices are well above fair value.  The most bearish factor for oil is dollar strength.  At the same time, falling inventories have been supportive and concerns over falling Iranian exports, due to the administration’s sanctions,[9] are giving oil a bit of “geopolitical premium.”  We would expect oil prices to remain elevated, although we note that the Trump administration is clearly worried about high oil prices denting consumer confidence.  According to reports, the administration is working to boost production from other oil producers, including the U.S.[10]