[Posted: 9:30 AM EDT] Given the large amount of news from the weekend, there were a couple of items that we wanted to mention but, for brevity, waited until today.  First, the Bank of International Settlements released its table of early warning indicators for banking system stress.

The key data is the credit-to-GDP gap.  The BIS measures the ratio against its long-term trend, and any reading over 10% has signaled trouble.  China is well above that level and the other columns suggest that the country is rather sensitive to rising rates.  The BIS admits that its indicator is “early” and countries can exceed safe levels for a long time before trouble develops. But, this data does show that the Chinese banking system is vulnerable to systemic risk.

Second, the Financial Accounts of the U.S., formerly known as the Flow of Funds data, was released by the Federal Reserve for Q2.  Although the report is a treasure trove of information, we would like to point out two charts, in particular. 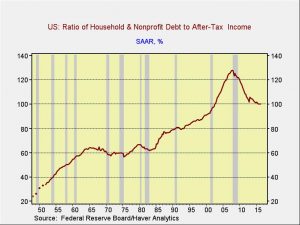 This ratio peaked at just under 128% in Q4 2007.  It has declined to 100.1% but the pace of household deleveraging has clearly slowed.  Debt growth remains modest, with household liabilities growing at a modest 2.8%.  The slowdown in deleveraging will tend to support economic growth by boosting consumption.

The other chart of note is shown below.  It measures homeowners’ equity in real estate.  In general, we look for a positive wealth effect to boost spending once households have about 60% equity in their homes.  The latest shows a reading of 57.1%. 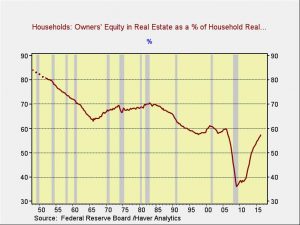