The FOMC meeting turned out hawkish.  Other central banks were active today. Trade negotiators from China begin talks in the U.S. today.  Here is what we are watching this morning:

Hawkish Fed:  The FOMC did cut rates by 25 bps but nearly everything else about the meeting was disappointing for the doves.  The dots plot suggests this will be the last easing that is consistent with the recent easing being more of a mid-course correction instead of being the beginning of an easing cycle.  The dots chart below suggests this will be the last rate cut, a position more in line with a correction than an easing cycle. In fact, based on the 2019 dots, 10 members would either hold rates at the current level or increase them by 25 bps.  Additionally, next year, the board is nearly equally divided on one more cut or raising rates.  The divergence between the FOMC and the markets are stark, not to mention the goals and aspirations for monetary policy from the White House. 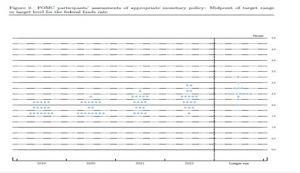 Perhaps even more disturbing is the increasing number of dissents. George (KC FRB) and Rosengren (Boston FRB) did not want to cut, while Bullard (STL FRB) wanted a 50 bps reduction (although no dot reflect that desire).  It is becoming clear that Chair Powell is unable to bring the committee to a consensus on policy.  This inability will make it difficult to move policy in either direction.  Simply put, additional easing will require strong evidence that the economy is weakening.  In the press conference, Powell expressed little concern about the repo problems, which is also a bit unsettling, especially since the NY FRB has conducted repo operations again this morning, making this the third consecutive day of such actions.

Market reaction was swift; treasury yields, especially in the short end, jumped, flattening the yield curve.  The dollar appreciated and gold prices fell.  Equities did manage to rise, likely on a positive economic outlook from the FOMC.  The bottom line: the FOMC isn’t poised to aggressively cut rates unless the situation changes.  History tells us that by the time the evidence is clear that the situation has changed, it will be too late to avoid a recession.

Other central banks:  The Bank of Japan kept its monetary policy unchanged, as expected, but Governor Kuroda promised to consider further loosening in October.  With the Fed and other major central banks loosening policy, Kuroda’s statement amounts to an effort to talk the yen down, but it doesn’t seem to be working.  So far today, the yen is up some 0.5% against the dollar.  Also, The Bank of England kept its benchmark interest rate unchanged at 0.75%, as anticipated.  It also warned rates could go either up or down in the event of a no-deal Brexit, but many policymakers say a cut to stimulate demand would be more likely than a hike to support the pound and reduce inflation pressure.

U.S.-Japan Trade:  Economic Revitalization Minister Nishimura said the new U.S.-Japan trade deal will be ready to sign at month’s end.  In a sign of what the UK may face in any post-Brexit deal with the U.S., Nishimura admitted that the government would have to provide additional support to farmers and small businesses that would be impacted by the deal.

Growth prospects downgraded:  The OECD has reduced its forecast for global growth, calling for growth in 2019 at 2.9%, the lowest since 2009.  The group warns that if trade tension remains high, sluggish growth will extend into 2020.

Brexit:  There is some movement in addressing what may be the most contentious element of exiting the EU, the border with Northern Ireland.  PM Johnson is floating the idea of creating a special economic zone for Northern Ireland, which looks a lot like an early EU plan that would put the trade border on the Irish Sea.  More importantly, the Unionist parties appear to be softening their stance on this issue; previously, they had opposed such measures.  Creating a trading zone probably can’t be accomplished before Halloween, but the Leavers would probably accept an extension if a way forward can be made on the Irish border issue.

Saudi Arabia:  SoS Pompeo made the strongest statement on this issue to date, calling the weekend’s missile and drone attack an “act of war.” The Saudis held a press conference yesterday and all but implicated Iran for the attack.  However, there is little evidence that President Trump has much interest in a military response.  The reaction thus far has been to increase sanctions against an already heavily sanctioned Iran. Pompeo is working to build a coalition against Iran and work within the auspices of the U.N.  Reports suggest the White House is analyzing other alternatives, but it does appear the appetite for kinetic action is quite low.

President Trump campaigned changing America’s hegemonic role, offering to step back from being the “global policeman.”  The lack of a military response to this attack is clear evidence that he is doing what he said he would do.  However, the U.S. isn’t fully in control of the situation.  Iran can continue to escalate; if the only response is sanctions, the mullahs will likely conclude they can act with impunity and engage in additional actions.

Odds and ends:  Commercial land prices outside of Japan’s major cities have posted their first annual rise in 28 years. Congressional leaders reached a deal on a stopgap spending bill that would preclude a new government shutdown through late November.

In the details, U.S. crude oil production was unchanged at 12.4 mbpd.  Exports fell 0.1 mbpd while imports rose 0.3 mbpd.  The rise in stockpiles was mostly due to falling refinery demand (see below).

This chart shows the annual seasonal pattern for crude oil inventories.  As we approach the end of the spring/summer inventory withdrawal, we are starting the autumn rebuild period at a sizeable deficit.  Without aggressive increases in stockpiles, we will likely continue to lag seasonal patterns which, on its own, is bullish.

The most important information from this week’s data is that we appear to be starting the autumn refinery maintenance season.

The drop in refinery utilization will likely continue for the next four weeks; utilization should begin to rise by mid-October.  During this period, inventories usually rise.  However, the usual seasonal rise will depend on Saudi production. 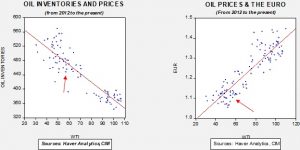 Based on our oil inventory/price model, fair value is $68.30; using the euro/price model, fair value is $48.23.  The combined model, a broader analysis of the oil price, generates a fair value of $54.54.  We are seeing a clear divergence between the impact of the dollar and oil inventories.  Given that we are into the maintenance season, we would normally expect inventories to rise.  However, with the Saudi outage, we may see inventories remain constrained, thus prices may find some support from constrained inventory growth.  We note that after claiming oil supplies will be restored by the end of the month, the KSA is seeking to import petroleum products from other nations and for customers it has promised to supply with oil, it is offering less valuable grades.  Oil prices rose on this report. We remain highly skeptical that Saudi Arabia will be back on line by month’s end.