[Posted: 9:30 AM EDT] The news flow is unusually quiet this morning.  The Kavanaugh hearings and trade continue to dominate the headlines.  Here is what we are watching today:

Trade: Financial markets are still struggling to discount the impact of the recent tariff announcement and China’s retaliation.  It has become generally acknowledged that the Xi government underestimated President Trump’s intentions with regard to trade.  U.S. presidential candidates bashing China is nothing new; Bill Clinton made it a point to frame the Bush administration as soft on China back in the early 1990s.  However, all U.S. administrations have generally supported China’s integration into the world economy regardless of the rhetoric expounded during campaigns based on the American belief that democracy and free markets are the only reasonable organizing principles for government and that all nations eventually move toward such governments once reaching a certain level of development.  It appears the Chinese leadership expected similar behavior from the incoming U.S. president.  Trump has proven to be different and China is scrambling to respond.[1]

The newest tariffs appear to be hitting private Chinese companies harder than state-owned enterprises.[2]  This could give Xi more power as private companies will likely come to the CPC for help.  China is trying to maintain the idea that it is a good place to invest.[3]  As a result, this morning, Premier Li Keqiang pledged a set of pro-business policies and offered equal treatment to foreign investors.  In addition, he also promised not to “weaponize” the CNY through depreciation.[4]  At the same time, China has put new tariffs in place against U.S. goods.[5]  We do note that there have been some surprises; China’s announced tariffs on LNG proved to be less than forecast, lifting natural gas prices yesterday.

On another important front, negotiations continue with Canada on NAFTA.  Canadian leaders are facing increasing pressure from political and business leaders on both sides of the border.  Canadian business leaders are coming to realize that the potential losses from a break in trade relations will be extraordinarily damaging to the Canadian economy.[6]  And, U.S. congressional leaders are pressing Canada to accept the deal already made with Mexico.[7]  We suspect Canada will acquiesce and accept U.S. terms to maintain the treaty.

Overall, U.S. equity markets appear to be discounting the trade issue.  We note that P/Es have lost about two turns since the rhetoric escalated, which is probably a reasonable adjustment to the current level of tensions.  At the same time, a prominent wirehouse noted yesterday that “America First” wouldn’t last.  We think this position is likely incorrect; in fact, America First began with President Obama (remember “leading from behind”?) and the process of American adjustment to the hegemonic role is well underway.

Brexit: As negotiations continue, the potential for a “hard Brexit” is both increasing and fears of such an outcome are focusing efforts on both sides.  The EU is softening its position in a few key areas, including the border on Northern Ireland.  The fear is that a hard border could foster a return to the sectarian tensions that dominated the Irish Isles for centuries.  The plan is to keep Northern Ireland effectively in the EU for trade purposes while having a hard border on the British Island itself.[8]  There is also growing talk of a second referendum.[9]  The current environmental secretary and perpetual candidate for PM, Michael Gove, has suggested that any deal reached now could be altered by a future PM.  Gove hopes to encourage the hard-core Brexit supporters to support PM May’s “Checkers” proposal by arguing that if they don’t like it, they should still support May’s plan to avoid the chaos of a sudden break[10] and eventually change it in the future.  Meanwhile, important car companies are warning of closure plans if Brexit is disorderly,[11] and security officials are telling lawmakers that losing EU crime-fighting tools could make it harder to protect U.K. citizens.[12]  Simply put, supply chains are deeply imbedded between the EU and the U.K. and a hard border will cause significant disruptions.  Already, there are reports of hoarding or plans of such measures.[13]  If the Brexit plan turns out to be “soft” or mostly symbolic, seamless and avoiding major disruptions, the GBP will likely rally.  On the other hand, a hard Brexit will likely lead to a deep decline in U.K. financial assets.

An American base in Poland?  Even with America First, other nations still want U.S. involvement.  Poland, geographically situated on the Great Northern European Plain and lacking natural defenses, has been invaded repeatedly from east and west.  Fearing Russian expansion and clearly worried that Western Europe is a military “paper tiger,” the president of Poland, Andrzej Duda, offered financial support for the building of “Fort Trump” in Poland to house American troops.  Currently, the U.S. has 4,000 troops in Poland.  Poland would like to make that permanent and is apparently willing to pony up resources for that protection.

Economy humming:  The most recent iteration of the Atlanta FRB’s GDPNow forecast shows growth projections at 4.4% for Q3. 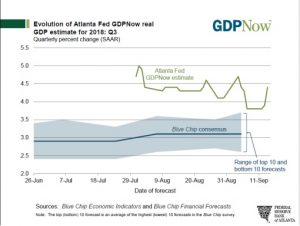 The biggest contributors to growth are consumption and inventory rebuilding. 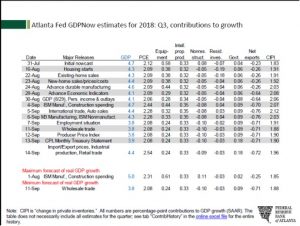