Markets are stable this morning after a wild day in the overnight lending market.  The Israeli elections did not yield a clear result.  The FOMC meeting concludes today.  Here is what we are watching this morning:

The funding problem:  We have received many inquiries on the state of the money markets.  Yesterday, the money markets were roiled by an apparent funding shortage which sent repo rates soaring.

Bids for fed funds reached the 5% level, well in excess of the upper limit of the fed funds target, currently at 2.25%.  For the first time since the onset of QE, the New York FRB conducted overnight  repo operations; the NY FRB was authorized to purchase up to $75 bn of collateral to inject cash into the system with about $58 bn being drawn.  In an unsettling development, the “plumbing” didn’t work initially, and the operation was delayed by about 25 minutes.  The fact that this facility hasn’t been used in over a decade is probably the reason for the delay; it’s possible that a number of people on the NY FRB’s desk had never been involved in such an operation.

However, before we jump into all of that, a bit of history is in order.  The Fed used to routinely intervene with repurchase operations before the financial crisis.  When banks were in the settlement period at the end of the month, banks with excess reserves would lend them to other banks that were lacking.  Occasionally, spikes in fed funds occurred; around holidays, a bank somewhere would find itself short of reserves and by the time they came to the Fedwire, most banks were closed and the ones that were not could lend at a penalty rate.  Usually, the next day, the Fed would conduct repo operations to buy securities and put liquidity back into the system.

Then QE happened, and the traditional way that money markets operated was changed.  The banks were flooded with reserves, so the Fed could no longer guide the policy rate by adjusting the level of bank reserves.  Instead, it began paying interest on reserves and that Interest on Excess Reserves (IOER) rate became how the policy rate was set.  There is no incentive for a bank to lend reserves below that rate, so the IOER has become the effective floor for interbank reserve lending. 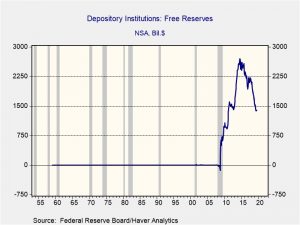 Here is what we think is happening: 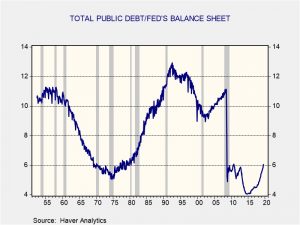 FOMC:  There is no doubt the Fed will cut rates by 25 bps today.  Everything else will probably disappoint.  We doubt the dots will signal further easing this year and we expect at least one dissent from the KC FRB.  Additionally, the press conference will likely be non-committal; do not expect any clarity on the aforementioned money market issues in the presser.  If we are right, the yield curve should flatten, gold will ease, equities will likely ease.

Oil:  The KSA says it will return to normal production levels by the end of the month.  We think this claim is wildly optimistic; we would expect, at best, 2.0 mbpd to 3.0 mbpd by the months end.  Both the U.S. and the KSA seem to believe that Iran is behind the attack, but seem reluctant to assign blame.  That’s because doing so will require action and neither the Trump administration nor the KSA seem to want a war with Iran.  BREAKING:  PRESIDENT TRUMP INDICATES HE WILL INCREASE SANCTIONS ON IRAN.  This decision shows his deep reluctance to engage Iran militarily.  This reluctance may encourage Iran to become even more aggressive.

Hong Kong:  Protestors are increasingly pressing the U.S. to support  its movement for democracy.  The White House has mostly been non-committal; if the president intervened in the situation, it would likely end any chances of a trade deal.  However, that isn’t stopping Congress from getting involved.  House bill 3289 has been introduced, titled the Hong Kong Human Rights and Democracy Act of 2019, would force the executive branch to judge if the two systems program is being upheld, and direct the White House to take action if China is deemed to have undermined Hong Kong’s democracy.  It is highly unlikely this will pass, but it does show that this issue could become a complication in trade negotiations.

Spain:  The country will hold elections again on November 10th as Pedro Sanchez was unable to form a coalition government.  This will be the fourth election in four years, and highlights a political problem seen across Europe; deep divisions in society are making nations nearly impossible to govern.