[Posted: 9:30 AM EDT] It’s Fed week!  The FOMC meets this week, beginning tomorrow and ending on Wednesday.  This meeting will bring new forecasts, dot plots and a press conference.  Here is what we are watching today:

The President to the UN: President Trump will address the UN today.  Although the media is watching this event very closely given the general anti-UN views Trump expressed during the campaign, we would expect a mostly neutral speech, read from a teleprompter.  There is little to be gained politically by making a major negative speech at a venue where most of his political supporters will monitor.  Although anything is possible, we would be very surprised by anything market moving.

The Fed: The consensus outlook is that the FOMC will keep rates steady and begin the process of reducing the balance sheet.  This outcome is already discounted and shouldn’t have a major impact on financial markets.  As we have noted before, most of QE ended up on bank balance sheets as excess reserves.  Thus, removing those reserves shouldn’t have much of an effect on the real economy.  On the other hand, sentiment could be adversely affected; expanding the balance sheet did have a positive effect on equity markets through a higher P/E.  We will be watching to see if removing QE has a symmetric impact.  Our expectation is that it won’t.

War drums: Although the financial markets are becoming inured to events on the Korean Peninsula, comments from Washington are becoming increasingly hostile.  NSC Director McMaster believes that North Korea isn’t stable or rational enough to use nuclear deterrence policy if allowed to develop a fully operational nuclear weapon.  If that is one’s stance, the only rational thing to do is attack before the weapon is fully developed.  The plan appears to be to first lean on China aggressively, pushing Beijing to clamp down hard on the North Korean economy.  The key there is an embargo on oil flows.  If China were to cut off petroleum products to North Korea, the regime’s economy would grind to a halt in about a month.  If this effort fails, military action becomes more likely.  Despite all this war talk, we are not seeing the sort of actions we would expect if an attack was imminent.  There is only one carrier group in close proximity; if a full-scale attack is going to occur, we would expect three groups to participate.  We would also expect evacuations of non-essential Americans in South Korea.  Until these two events occur, we do not see an impending military strike.  We anticipate the financial markets will mostly ignore North Korea (barring an actual military strike from the Hermit Kingdom) until we see a buildup of carrier groups and evacuations.

A tumble in GDP expectations: The Atlanta FRB produces a report called GDPNow that keeps a running estimate for the current quarter’s GDP based on the path of economic reports.  The most recent report shows a rather sizeable dip in Q3 projections. 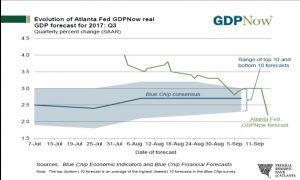 Estimates of GDP growth, which were running around 3%, have fallen sharply to 2.2%.  Of the 80 bps drop, 52 bps came from a drop in expected consumption, reflecting last week’s weak retail sales data. 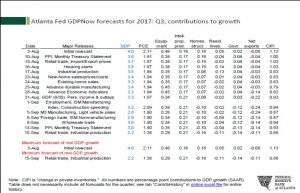 The table above shows the contribution to GDP from various components.  The obvious drop in PCE is noted but investment in structures, both business and residential, fell 13 bps.  Inventory rebuilding is expected to add 88 bps, down from 93 bps.  We do think that much of this is coming from the hurricanes, which will drain inventories plus disrupt spending, at least in the short run.  Of course, that will reverse as rebuilding begins.

Hurricane season isn’t over: Hurricane Jose is expected to brush the East Coast before dissipating over cool waters in the central Atlantic.  On the other hand, Hurricane Maria is bearing down on several of the Caribbean islands recently devastated by Hurricane Irma.  Given the level of damage already suffered, it is hard to imagine how recovery can continue if another major storm hits the region.  Current tracking models suggest the path will be similar to Jose, moving north, then west and eventually reaching the northern Atlantic.