It’s Fed week, but the big news is that financial and oil markets are roiled by an attack on Saudi Arabia’s (KSA) oil infrastructure.  Here is what we are watching this morning:

The attack of the Houthis?  Houthis in Yemen have claimed a massive attack on Saudi Arabia’s oil infrastructure.  Here are the key points:

Overall, the attack is a new, significant risk factor for not just the oil markets but for the world economy.  It will take a few weeks to determine the significance of this weekend’s activities.

The problem of easing:  As we noted last week, ECB President Draghi’s easing plans were not universally supported.  It appears that at least nine members had some level of misgivings.  This week, Chair Powell has his turn to try to convince the voting members that a rate cut is necessary.  Although we have little doubt that a 25-bps cut is coming, we would not be surprised to see a hint of uncertainty surrounding future cuts.  The financial markets have reduced their expectations of future rate reductions; we might see more if the statement is balanced and does not lean toward further easing.

Perhaps Powell’s biggest hurdle will be convincing the Phillip’s Curve adherents that they should cut rates.  To visualize Powell’s problem, we use the Mankiw Rule, a derivation of the Taylor Rule.  The Taylor Rule is designed to calculate the neutral policy rate given core inflation and the measure of slack in the economy.  John Taylor measured slack using the difference between actual GDP and potential GDP.  The Taylor Rule assumes that the Fed should have an inflation target in its policy and should try to generate enough economic activity to maintain an economy near full utilization.  The rule will generate an estimate of the neutral policy rate; in theory, if the current fed funds target is below the calculated rate, the central bank should raise rates.  Greg Mankiw, a former chairman of the Council of Economic Advisors in the Bush White House and current Harvard professor, developed a similar measure that substitutes the unemployment rate for the difficult-to-observe potential GDP measure.

We have taken the original Mankiw rule and created three other variations.  Specifically, our model uses core CPI and either the unemployment rate, the employment/population ratio, involuntary part-time employment and yearly wage growth for non-supervisory workers.  All four variations compare inflation and some measure of slack.   Here is the most recent data: 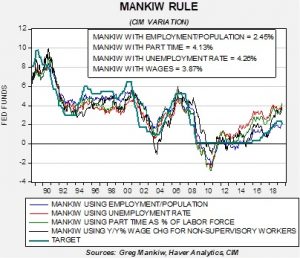 This month, all the variations’ estimated target rates rose substantially, a product of rising inflation and tighter labor markets.  All the models now suggest the Fed is too easy, although the employment/population variation is just above the current midpoint implied by the target.  Essentially, even the most easy variation would argue for steady policy.  Powell, likely on momentum alone, will be able to get a rate cut at the meeting but further cuts will likely require more persuasion.

The divergence of opinion about monetary policy is coming from two sides.  The first is the idea that the economy isn’t in all that bad of shape and cutting rates is not justified.  This is the usual problem with monetary policy and the business cycle.  Financial markets give the longest lead but tend to trigger false positives; waiting for the economic data to show a downturn in place usually means policymakers cannot move quickly enough to avoid a recession.  However, the fear is that easing when labor markets are tight might trigger inflation and thus the desire to hold steady will be notable.  The second idea is that monetary policy is exhausted and further stimulation must come from fiscal policy.  We are more sympathetic to this argument, but the problem is that the Western world’s legislatures are deeply polarized and (a) getting a fiscal package passed will be hard, and (b) getting a package passed that is actually effective may simply be impossible.

On a related note, the BOJ is considering further easing, which would require negative nominal interest rates.

On strike:  The United Auto Workers (UAW) is calling a strike against General Motors (GM, 38.86).  The union has instructed some 46k workers to walk off the job, the first action of this magnitude since 2007, when a UAW strike idled 73k workers.  The union is striking over the usual things, benefits and pay, but is also wanted to force the automaker to follow earlier contracts that forbid closing the plants except in an emergency.  Work stoppages have become increasingly rare since the 1980s.  Last year, nearly 500k workers were involved in stoppages.  Including this recent action against GM, the workers involved year to date is 372k. 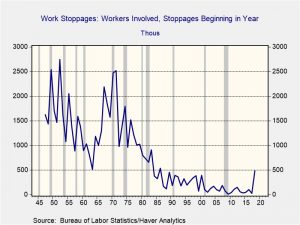 The increase in labor actions is likely due to the long expansion.  We suspect the UAW leadership wants to make a deal now when the economy is still expanding because it will be much more difficult to press for higher wages in a recession.  In addition, UAW officials are facing investigations from the DOJ; a successful strike could keep the rank in file aligned with the current leadership. 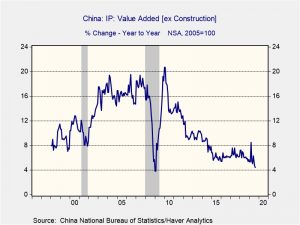 Fixed asset investment rose 5.5%, which was weaker than forecast, and retail sales growth eased as well. 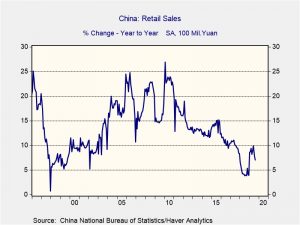 All this suggests that China needs further stimulus to avoid additional economic weakness.  There is little doubt that the trade war is adversely affecting China’s economy more than the American economy; however, the issue isn’t so much the level of pain but rather the tolerance for it.  It is our position that Chairman Xi believes China has a higher pain tolerance and that Washington will blink first.

An interesting side note is that Chinese firms are divesting foreign assets, including those in the U.S.  It is unclear what is driving this divestment.  Some of it is likely coming from government pressure to reduce exposure abroad.  There is a desire from Beijing to curb capital flight.  Restrictions on investment are increasing and the change in the investing climate might be encouraging divestment.  But the bigger worry is that firms in China may be facing a cash crunch and they are divesting to build liquidity.  If the latter is the reason, it bodes ill for global growth.

United States-Japan:  In a joint statement that President Trump and Prime Minister Abe will release after their meeting in New York next week, the U.S. will promise not to hike tariffs on Japanese autos.  The leaders will also sign a new bilateral trade agreement.  Up until now, President Trump hasn’t definitively ruled out new tariffs against Japanese auto imports, so the move is a significant sign that the trade tensions weighing on so many other U.S. relationships probably won’t be a problem for Japan in the near future.

Hong Kong:  For the 15th straight weekend, anti-Chinese protestors launched demonstrations and mass vandalism, underlining their view that Chief Executive Carrie Lam’s withdrawal of her controversial extradition bill was “too little, too late.”  In what may be a new tack by Beijing to fight the protestors and split the pro-democracy movement, editorials in three Chinese state-owned media outlets accused Hong Kong’s property tycoons of hoarding land and driving up real estate prices.  With tensions remaining, the risk of a crackdown by China is likely to continue weighing on Hong Kong’s economy and asset markets.

United States-European Union:  In the longstanding dispute over EU aerospace industry subsidies, the World Trade Organization approved a U.S. request to impose punitive tariffs against some European goods.  If implemented, the new U.S. tariffs could widen the trade war and further undermine confidence and investment in the EU.

Italy:  The new governing coalition of the populist, left-wing Five Star Movement and the center-left Democratic Party has filled out its cabinet positions, putting the traditionalist Democrats in an unexpectedly strong position.  For example, Roberto Gualtieri, a Democratic Party veteran and EU insider, has gotten the post of finance minister.  The new government is widely expected to loosen fiscal policy in an effort to boost the economy, just as the previous coalition between Five Star and the right-wing League sought to do, but the new government is likely to get substantially more leeway from the EU, which should help calm some of the volatility in Italian assets that was common over the last couple of years.  To illustrate how the new coalition might be more different in tone than in substance, the government allowed a charity ship with 82 rescued African migrants to dock in Italy over the weekend, but only after requiring it to first wait six days at sea while it negotiated with other EU countries to take some of the refugees.

United Kingdom:  Prime Minister Johnson today holds his first face-to-face talks on Brexit with the outgoing European Commission president, Jean-Claude Juncker, and the EU’s chief Brexit negotiator, Michel Barnier.  Johnson is not expected to present a detailed proposal for a new exit deal, but he may float some trial balloons, especially related to his thoughts on keeping Northern Ireland in a customs union with the EU.  There also seems to be some disagreement within Johnson’s cabinet as to whether a Brexit delay might be countenanced.

Tunisia:  Exit polls show outsiders won the first round of the country’s presidential election yesterday.  The top vote gatherers were apparently Kais Saied, a constitutional law professor unaffiliated with any party, and Nabil Karoui, a television tycoon imprisoned for tax evasion shortly before the balloting.  The current prime minister and other mainstream politicians were punished for their inability to improve economic growth and cut corruption since the country launched the “Arab Spring” reform movement in 2011.  If the results are confirmed, Saied and Karoui will face off in the final round of the election on October 13.