[Posted: 9:30 AM EDT] There isn’t a ton of news in the financial markets this morning.  The most discussed is the DOJ decision to levy a $14 bn fine against Deutsche Bank AG (DB, $14.76).  In European trading, shares were off over 8% overnight.  The bank was anticipating a fine but the size far exceeded expectations.  Other banks in Europe will likely also face fines, so how much Deutsche Bank actually pays is broadly important.  In addition, Deutsche Bank has other woes, so this fine came at an inopportune time.  This event raises fears that the Eurozone banking system may be suspect; the problems plaguing Italian banks have been known for a while, for example.  There is a solution—European banks will likely have to raise capital and consider international mergers.  So far, this outcome hasn’t been embraced.

EU leaders are holding informal meetings in Bratislava today to discuss Brexit.  In a speech today, Chancellor Merkel said that the EU is at a “critical point.”  We would tend to agree.  Brexit exposed real differences within the EU.  Southern Europe wants more financial support and an easing of debt and deficit rules.  Northern Europe, being the creditor, disagrees.  Central and Eastern Europe are seeing rising nationalism and oppose Brussel’s rules on immigration, refugees and other issues.  At the same time, the northern European nations are dealing with a rise of nationalist parties themselves.  How the EU manages Brexit is part of this debate; some nations want to pressure Britain with harsh conditions on the hope that the British will change their minds.  After all, several referendums on EU treaties have failed in other nations only to be eventually ratified.  The danger of going this route is that Britain’s position will harden even further, disrupting trade and investment flows.  On the other hand, going too easy on the U.K. may prompt others to follow suit and leave the EU.  It is these conditions that prompted Merkel’s aforementioned comment.

With the release of CPI data, we can update our versions of the Mankiw rule model.  This model attempts to determine the neutral rate for fed funds, which is a rate that is neither accommodative nor stimulative.  Mankiw’s model is a variation of the Taylor Rule.  The latter measures the neutral rate by core CPI and the difference between GDP and potential GDP, which is an estimate of slack in the economy.  Potential GDP cannot be directly observed, only estimated.  To overcome this problem, Mankiw used the unemployment rate as a proxy for economic slack.  We have created three versions of the rule, one that follows the original construction by using the unemployment rate as a measure of slack, a second that uses the employment/population ratio and a third using involuntary part-time workers as a percentage of the total labor force. 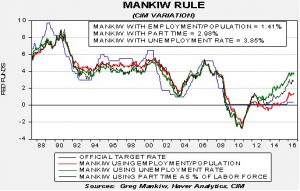 Using the unemployment rate, the neutral rate is now 3.85%, suggesting the FOMC is well behind the curve.  Using the employment/population ratio, the neutral rate is 1.41%, indicating that, even using the most dovish variation, the FOMC needs a rate hike of at least 100 bps to achieve neutral policy.  Finally, using involuntary part-time employment, the neutral rate is 2.98%.  Although we don’t expect the FOMC to raise rates next week, the pressure to raise rates is intensifying.  Of course, there is an ongoing debate as to the wisdom of the Taylor/Mankiw Rule framework.  Although there are clearly doubts about the model (the current wide deviation is clear evidence that the FOMC is deviating from these models), there is no obvious replacement.  Thus, we believe policymakers view the current deviation from the Taylor/Mankiw Rule models as temporary and policy rates will rise sharply at some future point.