[Posted: 9:30 AM EDT] The big overnight news was the BOE’s decision to hold rates and bond-buying steady, which was expected.  The committee vote was 9-0 in favor of the current policy.  The bank did indicate, however, that it was still on course to lower rates later this year and this news caused a modest selloff in the GBP.  Although the British economy didn’t collapse as some feared it would after Brexit, we believe the longer term situation is still rather negative in the wake of the referendum.

In other news, Italy’s PM Renzi says he will announce the date for the upcoming referendum on government restructuring on September 26.  This restructuring is seen as a “make or break” moment for Italy.  The referendum would streamline the Italian government by reducing the power of the upper house and allowing policy to be more easily implemented.  Renzi, who was not elected to the PM post, says he will resign if the referendum fails.  The fear is that if the referendum does not pass, populist forces that may support Italy’s exit from the Eurozone could become ascendant.

We note that EU President Jean-Claude Juncker gave a talk yesterday in which he admitted that the EU is facing an “existential crisis,” suggesting there is little common ground between members and governments are facing nationalist and populist threats that undermine European unity.  From Brexit to the weakening of Chancellor Merkel’s party in recent elections, Europe is likely facing a crisis.

The U.S. pivot to Asia took a couple of hits this week.  First, the mercurial president of the Philippines, Rodrigo Duterte,[1] said today that “China is now in power, and they have military superiority in the region.”  Duterte announced the end of joint U.S./Philippine naval patrols in the South China Sea and expelled U.S. forces from Mindanao, an island region of the country.  U.S./Thai relations have become strained after the Obama administration criticized the current military leadership that has controlled Thailand since the 2014 coup.  In retaliation, Thailand announced it will buy three submarines from China.  Meanwhile, China is showing investment on Laos and is working to improve relations with the new Myanmar government.  Although one does not want to jump to conclusions, this information seems to be signaling that some of South Asia’s governments are seeing China as the new regional power and are beginning to accommodate the Middle Kingdom.  We suspect they would prefer U.S. hegemony but fear that America is giving up on its superpower role.  Thus, these nations are simply preparing for a new environment.

This chart shows current crude oil inventories, both over the long term and the last decade.  We saw a huge 14.5 mb draw in crude stocks the previous week, which was mostly due to import disruptions caused by tropical storms.  About half of the oil imports returned to the market last week.  We would expect a rebound next week as imports normalize.

The unexpected drop in storage has put inventories below the normal seasonal trend.  Again, we would expect that drop to be reversed in the coming weeks. 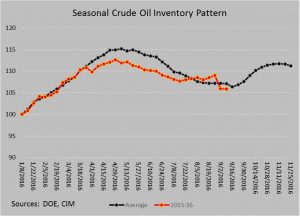 Based on inventories alone, oil prices are overvalued with the fair value price of $41.07.  Meanwhile, the EUR/WTI model generates a fair value of $49.30.  Together (which is a more sound methodology), fair value is $44.67, meaning that current prices are a bit cheap.  Although the market has put great hope on an OPEC deal next month, the plan looks to be more like jawboning the market higher.  For now, oil prices are mostly marking time before OPEC meets on the 26th.  We were somewhat surprised that oil prices fell off of yesterday’s unexpected draw, but expectations of rising inventories in the wake of the aforementioned drawdown are likely the reason.  In addition, reports yesterday that oil loadings will begin soon in two troubled areas, Libya and Nigeria, are also bearish factors.