[Posted: 9:30 AM EDT] With the exception of the GBP, financial markets were quiet overnight.  However, the CPI data and reports that North Korea may be preparing for a missile launch have led to increased volatility.  And, there was a lot of news to cover this morning.  Here is what we are watching today:

North Korea ready to launch: There are reports that North Korea may be preparing for a new launch.  In a similar vein, analysts looking at the recent nuclear test are concluding that it was more powerful than first thought, increasing the likelihood that the Kim regime has developed a thermonuclear device.

The BOE: The Bank of England left policy unchanged, as expected, but in its statement the majority indicated that “some withdrawal of monetary stimulus is likely to be appropriate over the coming months.”  The Monetary Policy Committee (MPC) voted 7-2 to keep policy steady, with the two dissenters calling for tighter policy.  Although Governor Carney appears to remain dovish, fears of rising inflation are leading the majority of the MPC to lean toward raising rates.  The GBP has rallied sharply on the news.

A DACA deal?  Twitter lit up yesterday evening with reports that the president, along with “Chuck and Nancy,” made a deal on DACA, where the Democrats would support improved border security.  Later, the White House indicated that a “deal” wasn’t done but discussions did occur.  It appears the president is willing to trade DACA for border security.  The important news here is that the president continues to form a working coalition with Democrats and moderate Republicans to isolate the Freedom Caucus.  It isn’t obvious if this will become the main working coalition for this president or if he will create new groups on a continuous basis.  However, there isn’t much evidence that President Trump has much sympathy for the Freedom Caucus; he doesn’t seem too inclined to shrink the government, deficits don’t bother him and a dovish Fed is preferred.  Thus, isolating the Freedom Caucus may be his working position.

A Chinese deal blocked: The White House has blocked a Chinese investor from purchasing Lattice Semiconductor (LSCC, 5.72).  The Committee on Foreign Investment in the U.S. (CFIUS) recommended scotching the deal.  If the transaction had been consummated, it would have been the largest Chinese purchase in the U.S. microchip sector.  CFIUS was concerned that the purchase would facilitate the transfer of intellectual property to China.  Most of the time, once a company realizes that CFIUS isn’t going to approve its deal, it quietly kills it.  The fact that Lattice and the purchaser, a private equity firm called Canyon Bridge Partners, continued to push the transaction is odd and suggests the firms may have thought the White House would overrule CFIUS.  However, given the administration’s growing wariness of China, this hope seemed misplaced.

Iran nuclear deal at risk?  The president must reaffirm the Iran nuclear deal every 120 days.  President Trump has expressed displeasure with the Iranian deal; although we expect him to approve it today, we would not be surprised to see him try to reopen negotiations in the coming months.  Every 90 days, the White House must certify that Iran is compliant to the agreement.  The next date will be October 15th, and there are growing worries that Trump will declare Iran out of compliance.  If the Iranian deal falls through, we would expect Iran to rapidly move toward building a bomb.

Russian war games: NATO leaders are watching Russia and Belarus hold large-scale war games.  Officially, 12,700 troops are participating but Western government sources put the real numbers near 100k.  The concern is that these exercises are a precursor to operations against the Baltic States.  Thus, for the next week, the region will be on edge, closely watching the Russian military as it runs its war games.

Fed policy: With the release of the CPI data we can upgrade the Mankiw models.  The Mankiw rule models attempt to determine the neutral rate for fed funds, which is a rate that is neither accommodative nor stimulative.  Mankiw’s model is a variation of the Taylor Rule.  The latter measures the neutral rate using core CPI and the difference between GDP and potential GDP, which is an estimate of slack in the economy.  Potential GDP cannot be directly observed, only estimated.  To overcome this problem, Mankiw used the unemployment rate as a proxy for economic slack.  We have created four versions of the rule, one that follows the original construction by using the unemployment rate as a measure of slack, a second that uses the employment/population ratio, a third using involuntary part-time workers as a percentage of the total labor force and a fourth using yearly wage growth for non-supervisory workers. 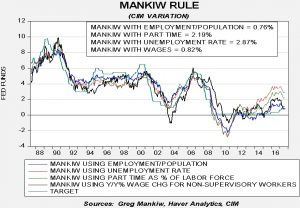 To a great extent, the issue for policymakers remains the proper measure of slack.  The danger for the financial markets is that the proper measure is wage growth or the employment/population ratio but policymakers believe slack is best measured by involuntary part-time employment or the unemployment rate.  If either of the latter two is their measure, policymakers will likely overtighten and prompt a recession.  Although the headline data for inflation looks like price level growth is accelerating, core CPI is generally flat on a yearly basis.  We are still not seeing much pricing pressure which means the FOMC will likely remain cautious.

This chart shows current crude oil inventories, both over the long term and the last decade.  We have added the estimated level of lease stocks to maintain the consistency of the data.  As the chart shows, inventories remain historically high but have declined.  Hurricane Harvey affected the energy market data again this week; the effects should continue for several more weeks.

As the seasonal chart below shows, inventories did turn higher again this week but they were affected by the aforementioned hurricane.  We are probably going to start the inventory rebuild period sooner than normal this year.  Although oil imports remain depressed, dipping nearly 0.5 mbpd, and production recovered by 0.6 mbpd, refinery capacity utilized dropped 2% to 77.7%, or 4.4 mbpd below capacity.  Media reports suggest that refineries are working hard to restart operations, but it will probably take a couple of months before the industry can achieve pre-Harvey refinery levels. 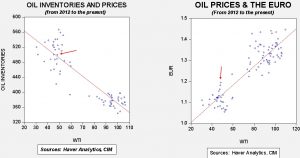 Based on inventories alone, oil prices are undervalued with the fair value price of $51.50.  Meanwhile, the EUR/WTI model generates a fair value of $67.07.  Together (which is a more sound methodology), fair value is $61.77, meaning that current prices are well below fair value.  Although the most bullish factor for oil currently is dollar weakness, the rapid decline in inventory levels is also supportive.

Aramco delay: Saudi Arabia is suggesting that it may delay its IPO of the state oil company, Saudi Aramco, into 2019.  That move suggests to us that the Saudis want to give the oil market more time to recover as they would likely want to price the offering in a better environment for oil prices.  If so, that would mean they will probably continue to prod OPEC to keep output constrained.  We view this as bullish news for the oil markets.