Happy Friday!  It’s a quiet morning with equities continuing to lift on trade hopes.  Should we be worried about inflation?  The day after the ECB.  Here is what we are watching this morning:

Trade:  It looks like an “off ramp” may be emerging, an interim trade deal with China.  As we noted yesterday, the U.S. will delay increasing tariffs on Chinese goods by two weeks to avoid applying the hike on a major anniversary day for the PRC.  President Trump is signaling he might be ok with an interim deal.  Yesterday, we had dueling reports, with Bloomberg indicating that White House sources had said the U.S. was considering a rollback of tariffs and a potential trade peace deal with Beijing.  CNBC ran a report from the White House denying this was true.  China is softening its stance on importing agricultural goods.  If China begins significant purchases, and some buying has apparently commenced, we could see tensions ease.  There is growing talk that negotiators could focus more on the trade deficit, but leave the more contentious issues for later.

This vacillating of tensions is a reflection of internal disputes within the administration.  The Navarro/Lighthizer wing wants significant reforms forced on China.  The Mnuchin/Kudlow wing wants a more modest deal where everyone is declared a winner, which would be welcomed by the financial markets.  The key, of course, is where the president sits, and he tends to swing between the two camps.  The past few months have shown that when financial markets panic, the president reduces the tension.  But, fearing he will be seen as weak on China, he tends to then revert back to a hardline position.  China does appear to want a deal, but only one that would disappoint the Navarro/Lighthizer wing.  It is possible that re-election concerns could push the president toward the Mnuchin/Kudlow wing; however, the president does believe that the trade war with China is a political winner and therefore does not necessarily see the hardline position as a problem.  Our take?  We will probably get more of the same—the cycle we have been seeing will likely continue.

In other trade news, there is a concerted effort from the business sector to get USMCA through Congress.  There is still a high level of opposition in Congress to passing the trade treaty, but progress is being made.

ECB:  Market reaction to the ECB was rather interesting.  The first reaction was that the easing was less than expected—the EUR rallied, bond yields rose and European bank stocks rallied.  Then, traders decided that it was, in fact, a significant easing, and the EUR depreciated, bond yields fell and European banks stocks fell.  After a while, these positions reversed again.  So, what exactly happened?  Draghi did get some significant measures adopted.  But, opposition was strong, especially from the northern Europeans.  This opposition prevented a larger rate cut and higher levels of QE.[1]  German opposition to further easing will likely be formidable.  So, the market’s take is that this latest package may be the last of its kind for a while, and although Draghi was able to get some open-ended elements into the program, Christine Legarde will likely need time in her new office before she can build consensus to do more.  When markets believe a policy has been exhausted, there is often a reversal in trend; the trend in place may need a steady diet of whatever caused it and the trend begins to reverse if that diet becomes restricted.  Essentially, the verdict from the financial markets is that this package is it and thus further weakness in the EUR is less likely.

What about inflation?  The rise in core CPI has raised concerns that inflation may be brewing.  Although the fear isn’t baseless, we don’t expect a major inflation problem to develop.  If one looks at core CPI relative to the ISM Manufacturing Index, the rise we are seeing in the core rate is normal. 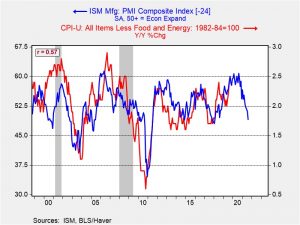 Since the turn of the century, the ISM Manufacturing Index tends to lead core CPI by about two years.  The rise we are seeing is “right on time” and we will likely see a rise to 2.5% into next year.  However, about a year from now, inflation should begin to decelerate and fall back below 2% into 2021.  Nevertheless, this rise in the core rate may slow the pace of easing.

Brexit:  There is a chance that Hungarian PM Orban could come to Boris Johnson’s aid by refusing to agree with an Article 50 extension.  EU decisions require unanimity; a single vote of opposition can kill a deal.  If Orban decides to oppose an extension, Brexit will occur on Halloween.  Meanwhile, it is starting to look like the solution to the Irish problem is to put the EU/U.K. trade border at the Irish Sea, leaving Northern Ireland in the customs union.  The only way this can occur is with new elections; currently, the minority government is still aligned with the Northern Ireland Unionists.  But, if Johnson wins the next election without needing the Unionists, he will be free to deal with them as he sees fit.

Johnson and the outgoing European Commission president, Jean-Claude Juncker, will meet in Luxembourg on Monday.  The meeting marks their first face-to-face talk on Brexit, and with Johnson’s hint this week that he could be open to keeping Northern Ireland in a customs union with the EU, there is probably some chance of a breakthrough.  However, Johnson would have more leverage by dragging negotiations out further, and Juncker is merely a lame duck.  Therefore, the more likely result of the meeting may simply be that it will provide Johnson the opportunity to float more details on his Northern Ireland thinking and sound out Juncker for the EU’s likely reaction.

Meanwhile, Labour is holding party meetings and the Brexit issue is dividing their party as well.  So far, Corbyn has not put out a clear position on Brexit.  If he chooses to champion Remain, he will lose a large share of traditional union voters to the Tories.  If he opts for Leave, he will lose the young urban supporters to the Liberal Democrats.  At some point he will have to choose, but he clearly doesn’t relish having to do so.

France:  Transport workers are on a massive strike today in order to protest President Macron’s proposed pension reforms.  Public transport in Paris is reportedly at a standstill.

Argentina:  The International Monetary Fund is reportedly getting cold feet about releasing a $5.4 billion tranche of its bailout package for Argentina that is due this month.  In part, that’s because of President Macri’s call for creditors to “voluntarily” accept delayed repayment on more than $100 billion of the country’s debt.  In addition, officials worry that the likely winner in next month’s presidential election, Alberto Fernández of the populist Peronist Party, may take an even more radical step toward debt repudiation.  Sources say IMF officials may therefore postpone the disbursal until after the election.

South Korea:  Moody’s has warned that more than a dozen major South Korean exporting firms could have their debt ratings cut in the coming months because of a deterioration in their earnings amidst the U.S.-China trade war.  The companies are mostly in the technology and chemicals sectors.

Japan:  Sources say officials at the Bank of Japan are becoming more open to the idea of cutting the benchmark interest rate even further into negative territory, especially after yesterday’s decision by the European Central Bank to do just that and to launch a new round of bond buying.  The sources say the BOJ would try to focus any further cuts on shorter maturities in order to maintain an upward-sloping yield curve and help ease the pain for financial firms.  That would be especially important amid reports that banks are already considering imposing account maintenance fees on consumer deposits.  In its policy statement last month, the BOJ said it wouldn’t hesitate to take new easing measures if needed.  The earliest it would make such a move would be at its meeting in late October, since officials want to gauge the impact of a planned hike in Japan’s value-added tax on October 1.

Econ 101:  California is moving to deal with its lack of real estate supply by implementing rent control.  Discussing the likely outcome would be a good weekend assignment for someone taking intro economics.

Long bonds?  The Treasury is considering 50-year and maybe even 100-year bonds.  They should, in our opinion.  Yields are low and extending funding would be prudent.  Should investors buy such bonds?  That’s a different story…

[1] However, another constraint to QE is the fact the ECB is running out of sovereign bonds to buy.  To expand QE further, other instruments will need to be available for purchase, e.g., bank loans, corporate debt, perhaps equities.