[Posted: 9:30 AM EDT] Financial markets are quiet this morning but there is a good bit of news.  Here is what we are watching this morning:

Census releases household income: The media is broadly reporting the Census Bureau report that real household income hit a new record at $59,039 in 2016, up 3.2% from the previous year.  Although a clear improvement, most of the trends we have seen over the past four decades remain in place.

Census has another income unit, families (as compared to households).  Family income is for those related by kinship or marriage, whereas household can be any group of cohabitating persons.  In terms of family income, we remain on the mostly flat trendline that began in the 1970s. 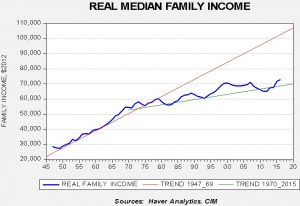 As this chart shows, until about 1980, real family income was on a rather steep trajectory; after 1980, that trend leveled off substantially.  Real family income for 2016 was $72,707; had we stayed on the earlier trendline, this number would be $102,465.  When Americans complain about “falling behind” or questioning the American dream, part of that lament is that the trendline fell for family income growth.  Why did this happen?  There are a number of reasons, but the primary one in our opinion was the combined effect of globalization and deregulation.  These two policies, key tenets of supply-side economics, were implemented to corral inflation.  Although inflation clearly declined, the cost to society was higher inequality. 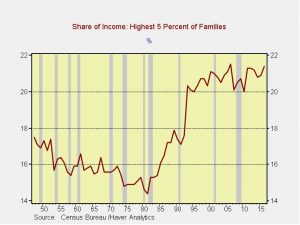 This chart shows the share of family income for the top 5% of families.[1]  It reached its minimum in the early 1980s and rose sharply afterward.  Essentially, growth in median family income stalled but rose sharply at the high end of the income scales.  If a worker could compete in a globalized economy and cope with technology, that worker was amply rewarded.  If not, the rewards were far less.

Politically, this disparity fostered the rise of populism.  If the income distribution is going to change, we would expect policies designed to increase regulation of the economy and reduce globalization.  Those policies would be inflationary over time, which brings us to our next point…

The rise of single-payer sentiment: Sen. Sanders (I-VT) is pushing the Democrat Party into a broad endorsement of single-payer health insurance.  Politically, this is a minefield.  Eliminating all forms of private insurance will be very disruptive.  The hope of single-payer is, “I can get all the health care I want for free.”  Of course, this is impossible.  Tax rates would balloon to pay for this change unless cost containment is implemented.  Clearly, this can be done because other nations do it, too.  However, expensive treatments for various maladies are often not covered.  The potential for disappointment is high.  A much more reasonable approach would be to have a public option for health care and mandate an insurance coverage requirement.  That would cover those who can’t afford private insurance.  Several European nations use this model and it seems to work rather well.  The problem for Democrats is that single-payer is rapidly becoming a litmus test for the primaries but it probably won’t be all that popular with the broad voting public.

Bullish IEA: The International Energy Agency, an arm of the OECD, released its August report today.  It showed the oil supply fell 720 kbpd from July to 97.7 mbpd.  OPEC cut output by 210 kbpd.  Oil demand expectations were also lifted, expected to increase by 1.6 mbpd this year, which would be the strongest demand growth in two years.  Meanwhile, Saudi Arabia is in discussions with OPEC to extend the production restriction agreement into mid-2018 (it’s scheduled to end in March 2018) and is chiding the group for cutting production but cutting exports less.  Cartel members have been selling oil out of inventory to maintain market share.  Saudi Arabia is pressing the group to cut sales, not just production.  Oil prices could be poised to rally if Saudi Arabia can extend the output restrictions and convince OPEC to cut exports.