The ECB delivers.  The U.S. is delaying tariffs on China.  Here is what we are watching this morning:

The ECB:  In the statement, the ECB restarted QE to the tune of €20 billion per month and cut deposit rates to -50 bps.  The benchmark rate was left unchanged, meaning negative rates won’t be applied to retail investors.  Forward guidance is now open-ended and results targeted; in other words, stimulus is no longer guided by the calendar (this is similar to how QE3 was managed in the U.S.).  Two new changes were implemented that give this package power.  The first is that negative rate tiering will be introduced.  This is potentially a very powerful tool.  Essentially, even under conditions of negative interest rates, tiering can introduce a profitable lending spread for banks.  For example, if the ECB offers loans to banks at -100 bps, even if banks lend at -50 bps, they are still earning a positive spread.  Using tiering, there is no limit to how low negative rates could go.  The second change is that term lending will be repriced and expanded.

In the press conference, in his prepared statement, Draghi (in his swan song press conference) lowered inflation and growth forecasts, blaming trade tensions between China and the U.S. for lower inflation and growth.  The tweet response from President Trump was noted (see below), but he continues to hew the line that monetary policy in Europe is not designed to guide the exchange rate.  That has been the official line of the G-7 central banks for years, allowing the dollar to weaken during U.S. QE and the weaker EUR and JPY under unconventional stimulus by those nations’ central banks.  Central banks argued that they were conducting policy for domestic reasons only.  Although this line is part of the old regime of policy, under President Trump, the argument probably doesn’t hold.  Next week’s WGR discusses the currency issue in detail.

Market reaction was interesting.  At first, the EUR and rates rose, likely because there wasn’t a cut in the deposit rate and QE was less than expected.  European bank stocks initially rose.  However, as the broader ramifications of the package were realized, bank stocks fell, interest rates plunged and the EUR fell sharply.  The decline in the currency caught the attention of the commander in chief, who remains sharply critical of the Fed.  The decline in the EUR may be the most problematic element of the ECB policy; we would expect the U.S. to refocus on EU trade negotiations, and what looks like a deliberate attempt to weaken the currency will likely trigger a more hostile position from U.S. trade negotiators.

Tariff delay:  To avoid applying a tariff hike on the 70th anniversary of the CPC’s capture of mainland China, the White House has delayed implementation for two weeks, making them effective on October 15.  According to reports, the delay was a direct request from top Chinese trade negotiator Liu He.  Thus, it has the air of a favor.  In response, the Chinese Ministry of Commerce welcomed the move and claimed Chinese buyers were already making inquiries about buying more U.S. agriculture goods.  The apparent baby steps toward reconciliation are welcomed as U.S. and Chinese negotiators prepare for another round of trade talks in the coming weeks.  Hopes of an early end to the trade war are providing a small boost to risk assets so far today.  However, the moves over the last day still seem quite modest to us.  There is still no assurance that the two sides can reach an amicable agreement.

China is attempting to separate trade talks from national security issues, hoping that by separating the issues it can more easily reach a trade agreement.  Separating the issues may prove to be difficult; we note the Pentagon has issued a list of military-linked Chinese companies that the U.S. and allies are expected to avoid for security issues.  Compliance with this list will, by design, affect trade.

Brexit:  It is becoming clear that if a Brexit deal is going to be reached, it will be resolved over the Ireland border issue.  If Johnson gets an election and wins a majority, he would no longer need the DUP.  In that case, we would not be surprised to see him put the trade border in the Irish Sea and put Northern Ireland within the EU, for purposes of trade.  If this happens, it will likely accelerate the eventual unification of Ireland.  Although this document was leaked earlier, the government’s worst case for a hard Brexit is dire.  The Brexit camp argues, with some degree of credibility, that the Remain camp has engaged in “project fear” to scare voters into voting to remain. This document suggests that without planning, a hard Brexit could be disastrous, at least in the short run.

Germany:  The respected Ifo Institute cut its forecast for German economic growth to just 1.2% in 2020 and 1.4% in 2021 as it warns that the continued pullback in the country’s manufacturing will spread to the services sector and push up unemployment.  The slowdown in Germany’s factory sector is by now well recognized, but the idea that it could spread to other sectors has gotten less attention.  As manufacturing also slows in the U.S., a key question is whether that slowdown will eventually start to undermine U.S. services and employment.

Japan:  Prime Minister Abe has named Shinjiro Koizumi, the son of former Prime Minister Junichiro Koizumi, as his new minister for the environment.  Although the younger Koizumi is only 38 years old, and while this is his first cabinet position, the fact that he inherits a political base from his popular father is being taken as a sign that he has a bright future in politics and could even be a possible successor to Abe.

Japan-South Korea:  As part of his cabinet reshuffles, Abe also named Isshu Sugawara as his new international trade chief, and Sugawara has already vowed that Japan won’t back down in the Japan-South Korea dispute over Tokyo’s behavior in Korea before and during World War II.  Reflecting the U.S. pullback from its traditional hegemonic role in geopolitics, Japan and South Korea continue to slap trade restrictions on each other because of the dispute.  In addition, Seoul today formally requested that the International Olympic Committee ban Japan’s “rising sun” flag at next summer’s Tokyo games, claiming the flag is a symbol of Japan’s brutal imperialism in the past.

Space, the Final Frontier:  In other news from South Korea, the government announced it would postpone the launch of its lunar orbiter until July 2022.  That disappointment follows the apparent crash landing of India’s lunar lander on the moon’s south pole last weekend.  Despite the failures, the big trend that many investors aren’t paying attention to is that with advancing technologies and falling costs, multiple countries are stampeding into space exploration.  Significant lunar and deep-space projects are now being conducted not only by the U.S., Russia and China, but also by countries like Israel, India and South Korea.  The efforts often involve both public and private entities.  This often unrecognized “megatrend” could potentially have significant investment implications in the future.

In the details, U.S. crude oil production was unchanged at 12.4 mbpd.  Exports rose 0.2 mbpd, while imports fell 0.2 mbpd.  Refinery operations rose 0.3%.  The drop in stockpiles was the combination of steady output, higher refinery demand, a rise in exports and a fall in imports.

This chart shows the annual seasonal pattern for crude oil inventories.  As we approach the end of the spring/summer inventory withdrawal season, we are starting the autumn rebuild period at a sizeable deficit.  Without aggressive increases in stockpiles, we will likely continue to lag seasonal patterns which, on its own, is bullish. 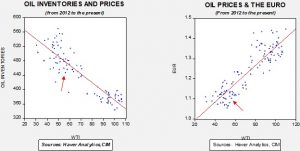 Based on our oil inventory/price model, fair value is $68.61; using the euro/price model, fair value is $47.97.  The combined model, a broader analysis of the oil price, generates a fair value of $54.46.  We are seeing a clear divergence between the impact of the dollar and oil inventories.  Given that we are nearing the end of the summer driving season, the bullish impact of inventories will likely diminish in the coming weeks; a sideways to lower price path is the most likely outcome.

We have seen two divergent geopolitical trends.  The first being the change in command in the Saudi oil ministry to a member of the Salman family is considered bullish for oil as the royal family wants higher oil prices to support the IPO of Saudi Aramco.  We note that Russia and Saudi Arabia are calling for better compliance on output cuts.  The ousting of John Bolton increases the odds of negotiations with Iran.  So far, the two have mostly balanced themselves, but if talks open up with Iran, prices will likely fall further.  We also note that the IEA is warning that slowing demand in 2020 will likely lead to higher stockpiles and lower prices.