[Posted: 9:30 AM EDT] Yesterday’s market action was consistent with a sharp reversal in the recent risk trade.  Amidst concerns about North Korea, the debt ceiling, trends in Washington, hurricane problems, etc., we saw Treasuries and gold rally, the dollar stumble and equities tread water.  Those positions reversed yesterday with the dollar and equities rising strongly while the dollar dipped and Treasury yields rose.  We are seeing some follow through overnight.  It should be noted that renewed tensions with North Korea could bring a return of the aforementioned flight to safety trade.  Here are some other items we are watching:

Capital goods balance and the dollar: We took a look at the capital goods trade balance; capital goods are goods designed for investment, e.g., machinery, rolling stock, etc.  Over the past 12 years, dollar strength has led to a rising capital goods deficit. 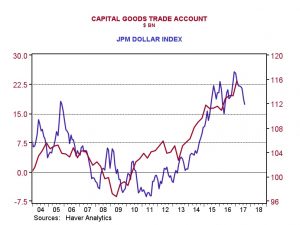 Recent dollar weakness may slow the rising deficit, but a significant narrowing of this deficit would likely require further weakness in the dollar.

North Korea: As expected, the UNSC did approve additional sanctions on North Korea.  However, these new sanctions are much less than the U.S. wanted.  Given that China and Russia have veto power on the Security Council, getting any significant sanctions through the U.N. will be difficult.  We do note that most major Chinese banks announced they will not open new bank accounts with North Korean ties.  This action might be signaling that the Xi regime does not want to give into U.S. demands via the U.N. but wants to show its displeasure with the Kim regime over its behavior.

La Diada de Catalunya (Day of Catalonia): Yesterday, pro-independence supporters celebrated Catalonia’s national day by gathering in the streets of Barcelona in support of Catalonia’s independence referendum scheduled for October 1st.  Last week, the Catalan regional government passed through legislation that would allow its citizens to decide whether to leave or remain as a part of Spain.  The Spanish government has denounced the referendum as illegal and is looking for ways to stop the vote from happening.  An independent Catalonia could potentially cause headaches for the European Union as there are no guidelines on how to deal with a breakaway state.  In the past, the European Union has sought to quash separatist movements by stating that any breakaway state would have to leave and reapply.  Currently, polls shows that the remain camp is ahead 49.4% to 41.1%.  Although the vote is non-binding, a vote to leave Spain would embolden the separatists as they await the outcome of Brexit negotiations.  If the U.K. is able to strike a decent deal with the European Union upon its exit, then separatists will likely argue that Catalonia could negotiate a similar arrangement.