[Posted: 9:30 AM EDT] Although Friday’s sell-off in equities was impressive, the financial chatter over the weekend was almost non-existent.  U.S. equity markets have been extended for some time and, so far, investors took Friday in stride.  The proximate cause for the drop was a renewed fear of Fed tightening.  Boston FRB President Rosengren, previously a reliable dove, said on Friday that a rate hike is “justified” due to the growing tightness of the labor market.  We have said much over the past few years on the issue of the labor market.  This chart, which should be familiar to our readers, is probably the best way to show the uncertainty. 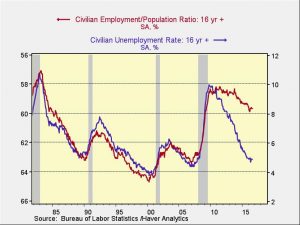 However, there are two problems with this explanation.  First, the millennial generation, which is also large, is entering its working years and should offset some of the retirements.  Second, the baby boomers are working longer.

The markets correctly worry that the Fed might tighten into an economy with ample slack and clearly low inflation.  Thus a hike may be a mistake.

There may be a bigger issue, however.  This most recent weakness has hit both long-duration bonds and stocks and seemed to follow after the ECB made no policy adjustments.  There is a worry that central banks may be concluding that there isn’t much more they can do to boost economic growth without participation from fiscal policy.  And, since the odds of expanding fiscal policy are remote, we may be moving to a market situation where further monetary stimulus isn’t coming.  A case can be made that monetary policy has been majorly supportive for equity markets.

The good news is that it’s doubtful the Fed will be contracting its balance sheet anytime soon.  The bad news is that we may be moving back to mid-range, which, from this point, will be a notable pullback in equity values.  The chart below shows an S&P index model, using the Fed’s balance sheet as the explanatory variable.  The last time we had a market this expensive to the model was in 2012 when the market was anticipating QE.  Fair value for this model is 2030 on the S&P.  Although a drop to that level would not be catastrophic, it would represent about an 8% decline from current levels. 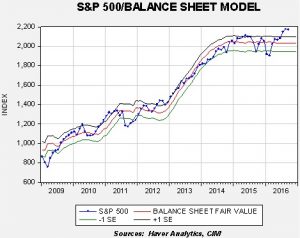 Governor Brainard, a reliable dove, is expected to speak early this afternoon.  She may ease fears of policy tightening.  Currently, the fed funds futures market places only about a 15% chance of a rate hike on the 21st of this month but the odds are around 60% for December.

There were three other news items from the weekend that caught our attention.

What is the state of Sen. Clinton’s health?  For the most part, these discussions have been only held among right-wing pundits and bloggers.  The mainstream media has either ignored the controversy or ridiculed it.  That stance may have changed after Sen. Clinton was removed from a 9/11 ceremony complaining of light-headedness.  The video of her entourage taking her away did not look good.  Later in the day, the campaign admitted the senator had pneumonia but mainstream commentators were sounding concern.  This election season has been one of the oddest in our memory.  The weekend events simply added to the controversy.  So far, financial markets have not been affected but we would not be surprised to see some volatility tied to the election as we get closer to November.

Is Kim Jong-un crazy?  The general consensus is no.  If one looks at it from the viewpoint of the dynasty, acquiring nuclear weapons is completely rational.  For most of the Cold War, North Korea was protected by the Soviet Union and its economy was mostly on par with the South.  But, its economy lost its funding from the U.S.S.R. with the fall of the Soviet Union, and South Korea’s economy was booming during the late Cold War years, clearly overtaking the North.  The Kims found themselves isolated.  They also could not help but notice that the U.S. had overturned various regimes in nations such as Libya, Iraq and Afghanistan, and President Bush had included North Korea in his “axis of evil.”  So, how does a state keep from getting invaded?  Get a nuclear weapon.  Dictators around the world believe that Muammar Gaddafi made a strategic error by ending Libya’s nuclear program.  It should be noted that getting a nuke won’t improve North Korea’s economy or allow it to take over the South.  All nuclear powers realize that the bomb is only a defensive weapon; even if North Korea attacked the U.S., it would face certain annihilation.  It doesn’t appear that is what the Kims have in mind.  Thus, we suspect North Korea will become a nuclear power that can deliver a warhead.  The U.S. won’t like it but there isn’t much we can do about it.  In fact, only one power on Earth can, and that’s China.  Until China decides North Korea is too big of a liability it will refrain from acting against the regime.  This morning, Chinese officials criticized the U.S. for “creating” the situation on the Korean peninsula.  After all, the U.S. is the global hegemon.  It has a duty to fix such things.  The only way China may conclude it has to curb the Kim regime is if South Korea and Japan decide to build their own nuclear deterrents.  The U.S. has worked to prevent that from occurring, but that doesn’t mean we can continue to prevent it.