Trade: Talks continue with Canada but reports suggest that dairy remains a major sticking point.  China has asked the WTO for authorization to impose trade sanctions against the U.S., while the U.S. is considering sanctions on Chinese officials involved with the suppression of Uighurs.[1]  The U.S. is offering a partial trade deal with the EU.[2]  For the most part, the pattern emerging appears to be the creation of a united front of sorts against China.  However, such a front would depend on Canada agreeing to a new NAFTA deal and trade reforms with the EU.[3]  Neither of these outcomes is guaranteed.

One trend we are seeing is that China is extending its reach by increased use of the CNY in international transactions.[4]  However, what we haven’t seen yet is China opening its capital account for foreign investment in a manner consistent with a reserve currency.  And, to become a real reserve currency, China would need to start running consistent current account deficits, which seems unlikely. 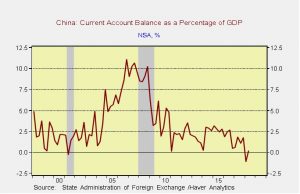 A more likely outcome is the use of CNY in the “one belt, one road” zone, similar to Britain’s Commonwealth area that used the GBP for trade and investment.

Another North Korean summit? Reuters[5] is reporting that Kim Jong-un has sent a “warm…positive” letter to President Trump asking for a second meeting.  The White House is apparently looking for dates.  Although meetings between SoS Pompeo and North Korean officials have been less than fruitful, there are hopes the leaders can forge an agreement.  Our read is that Pyongyang is trying to free itself from China’s grip and thus the potential for a deal is probably higher than it looks.

Attacks in Syria: Our most recent WGR[6] discusses those involved in the last major rebel stronghold in Syria.  Although we expect the U.S. to remain mostly uninvolved in this likely attack, the Trump administration has held a strict line on chemical weapons use.  Apparently, the U.S. is holding talks with the U.K. and France on coordinating attacks against Syrian forces if they deploy such weapons.[7]  Russia, consistent with its emerging doctrine on warfare, has already introduced reports that the U.S. and its allies plan to deploy chemical weapons in the region to provide an excuse for attacking Syrian troops.[8]

Brazil elections: In what remains one of the strangest election seasons we have seen, another twist emerged today.  Luiz Inácio Lula da Silva has finally admitted he cannot run for president from prison and has formally withdrawn from the race for president.[9]  Last week, we reported that the front-runner in the race, Jair Bolsonaro, had been assaulted and stabbed.  Bolsonaro was seriously wounded in the attack and will likely require additional surgery.  Interestingly enough, his poll numbers jumped after the incident.[10]

Florence, et al.: As we note below, Hurricane Florence[11] is bearing toward the Carolinas and is developing into a massive storm, likely reaching Category 4 by landfall on Friday (the storm has slowed from yesterday’s forecasts).  This storm is looking like an extreme event, perhaps another Harvey.  TS Isaac could make its way into the Gulf of Mexico (GOM), although its most likely path is into Central America.  We are also monitoring a “blob”[12] between the Yucatan and Cuba that might develop into a tropical event.  If this one does develop, it will likely disrupt oil and gas production in the GOM and could make it to the Texas coast.