Our Comment today opens with an update on the Russia-Ukraine war, with a focus on Ukraine’s ongoing counteroffensive in the south of the country and the latest fallout for the world’s energy markets.  We next review a wide range of other international and U.S. developments with the potential to affect the financial markets today.

Russia-Ukraine:  Ukrainian forces continue to press their counteroffensive to retake the Russian-occupied city of Kherson in the country’s south, although their focus is still on degrading Russian logistics points and command centers with precision missile and artillery strikes rather than trying to seize large swaths of territory.  This carefully calibrated strategy appears to be working so far, although it’s still not clear how far it can take the Ukrainians.  In the meantime, Russian President Putin yesterday expressed his frustration with the war as he heaped praise on the ethnic Russian sympathizers who make up the forces raised in the Donbas provinces of Luhansk and Donetsk themselves, suggesting they were fighting better than Russia’s own forces.  At the same time, new reporting suggests the Russians are desperately seeking ways to import advanced computer chips to replenish their stockpiles of military equipment, after many more than anticipated have been destroyed in the war. 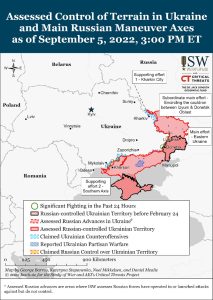 Global Oil Supply:  The Organization of the Petroleum Exporting Countries and its Russia-led partners yesterday agreed to cut their collective oil production by 100,000 barrels per day beginning next month, reversing an increase President Biden secured last month in a visit to Saudi Arabia.  Although the cut is small compared with the overall global scale of the oil market, it nevertheless represents a potent political statement that OPEC+ is willing to thwart U.S. preferences in order to buoy oil prices and push back against the West’s sanctions on Russia.

United Kingdom:  Over the long weekend, Foreign Minister Liz Truss was finally declared the winner of the race to succeed Boris Johnson as Conservative Party leader, setting her to become prime minister today.  After naming her cabinet, Truss’s first order of business will be to finalize a plan to shield households and businesses from a doubling of energy prices in October if current rules remain in place.

Japan:  The yen’s recent weakness has accelerated sharply today, as the currency plunged 1.0% to a 24-year low of about 141.99 per dollar.  Traders ascribe today’s drop to an aggressive interest-rate hike by the Reserve Bank of Australia.  While the RBA and other major central banks hike interest rates to combat inflation, the Bank of Japan remains the outlier in its insistence on holding its policy extremely loose. 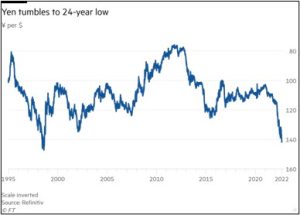 China:  An earthquake rating 6.8 on the Richter scale struck the southwestern province of Sichuan today, killing dozens and injuring hundreds.  The quake will compound the economic challenges facing Sichuan as it continues to deal with a major heatwave, drought, energy shortages, and COVID-19 lockdowns.

Chile:  Over the weekend, voters overwhelmingly rejected the country’s proposed new leftist constitution, with 62% voting against the law and 38% voting in favor of it.  The result is likely to buoy Chilean stocks in the near term, although left-wing President Boric has vowed to make a new effort at re-writing the constitution.

U.S. Bond Market:  According to Fitch Ratings, defaults on leveraged loans to below-investment-grade companies spiked to $6 billion in August, reaching their highest level since the midst of the pandemic in October 2020.  Since interest rates on the loans typically fluctuate with the market, the spike in defaults suggests that the Fed’s rate-hiking crusade is beginning to have a noticeable negative effect on junk issuers.  As the Fed continues to hike rates, we remain concerned that it will spark a bigger and broader bout of defaults among junk issuers.