Our Comment today opens with an update on the Russia-Ukraine war, including a bit more detail on Russia’s new mobilization plan and news of a possible Russian sabotage of the natural gas pipelines to Western Europe.  We next review a wide range of other international and U.S. developments with the potential to affect the financial markets today.

Russia-Ukraine:  The Ukrainian counteroffensives in the northeastern area around Kharkiv and in the southern region around Kherson continue to make modest progress, while Russian forces have now succeeded in re-establishing some defensive lines and continue to stage modest attacks in the eastern Donbas region.  Russian President Putin’s mobilization order last week is likely aimed in large part at generating infantry troops with the minimal skills and equipment to defend the new Russian lines into the winter.  While that mobilization is being carried out much more broadly than advertised to the Russian people, it may take some time before significant numbers of new troops can be deployed to the battlefield.  Even then, there is some question as to how well the Kremlin can keep them supplied.  In the meantime, the domestic political costs of the mobilization are rising.  With the call-up affecting people literally across the country, protests against the mobilization are growing, at least for the time being. 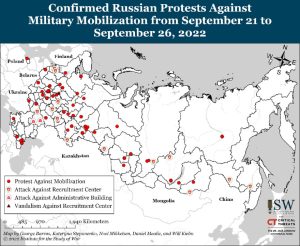 European Union:  As the war in Ukraine and Russia’s cut-off of energy shipments keeps gas prices sky-high across the EU, leaders from a range of member countries petitioned the European Commission today to impose a “dynamic price cap” on gas.  The idea would be to limit prices paid to slightly above the amounts paid in other world regions in order to provide LNG shippers with a continued incentive to make deliveries to Europe.  So far, the Commission has shied away from proposing a cap, and it’s unlikely to be part of the measures put forward ahead of an emergency summit of EU energy ministers on Friday.

United Kingdom:  As the pound continued to weaken yesterday in response to government plans for potentially inflationary tax cuts, the Bank of England warned it stands ready to raise interest rates as much as needed to hit its inflation targets.  However, the central bank did not signal that it would call an interim policy meeting to consider the matter, as some investors were expecting.

China:  In updated forecasts, the World Bank predicted that China’s economic growth this year will trail that of the other developing countries of East Asia for the first time since 1990.  The institution now expects Chinese gross domestic product to grow just 2.8% in 2022, down from its forecast of 4.3% in June.  It now expects regional GDP excluding China to grow 5.3%.

Colombia-Venezuela:  Illustrating how Colombia’s new leftist president, Gustavo Petro, is continuing to rebuild relations with Venezuela, yesterday the two countries reopened their border for the first time in seven years.  The move raises the risk that Colombia is losing its status as the U.S.’s most trusted ally in the region.

Canada:  Speaking of borders reopening, Canada’s government announced yesterday that it will no longer bar people that haven’t been fully vaccinated for COVID-19 from entering the country. It also stopped a requirement that travelers upload proof of vaccination and other information into a government app called ArriveCan.  The move will likely ease commercial and tourist traffic between the U.S. and Canada, and give a boost to cross-border trade.

U.S. Lumber Market:  Amid a continued slowdown in housing construction, lumber futures prices yesterday settled at $410.80 per thousand board feet, down about one-third from a year ago and more than 70% from their peak in March.  Although we remain bullish on commodities over the coming years, the pullback in lumber prices is a reminder that rising interest rates and an impending recession are likely to weigh on commodity values in the near term.

U.S. Hurricane Threat:  Hurricane Ian continues to move northward through the Caribbean, and it is now forecast to score a direct hit on Florida’s Tampa Bay later this evening or tomorrow.  Businesses in the Tampa region have closed in advance of the storm as local counties ordered evacuations for vulnerable coastal areas.