Our Comment today opens with an update on the Russia-Ukraine war, where there are many questions regarding the “partial mobilization” announced by Russian President Putin last week.  We next review a wide range of other international and U.S. developments with the potential to affect the financial markets today, including rumors of a potential coup against Chinese President Xi and a steep drop in the value of the British pound after the tax cuts announced by the U.K. government last week.

Russia-Ukraine:  The latest battlefield reports indicate Ukraine continues to regain territory with its ongoing counteroffensives in the northeastern region around Kharkiv and in the southern region around Kherson.  However, the gains have now become more modest, and Russian forces have apparently managed to turn the Ukrainians back in some places. 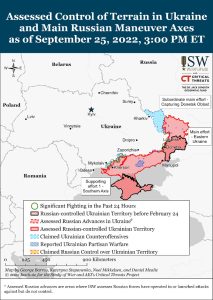 United Kingdom:  Even though the government’s announcement of massive tax cuts last week pummeled the pound, Chancellor Kwarteng doubled down yesterday and said in an interview that there would be further cuts over the coming year.  With the tax cuts generating fears of out-of-control budget deficits and inflation that could further undermine the currency, investors are increasingly expecting the Bank of England to hold an emergency meeting to hike interest rates further. 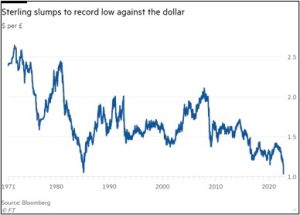 Germany:  As the German government desperately seeks new energy supplies to replace those shut off by Russia, it has struck a deal over the weekend for 137,000 cubic meters of liquified natural gas from the UAE to be delivered later this year.  The delivery will be the first at Germany’s new Brunsbüttel LNG import terminal, which is still being built.

Italy:  In parliamentary elections yesterday, a bloc of three right-wing parties including the neo-fascist Brothers of Italy, the League, and Forza Italia won a majority in parliament but apparently failed to win the two-thirds majority needed to push through constitutional changes.  The new government is expected to be led by Brothers of Italy leader Georgia Meloni, who would become Italy’s first female prime minister.

China-Coup Rumors:  Over the weekend, alternative media sources, primarily from India, were swirling with rumors of a coup against Chinese President Xi, possibly driven by Xi’s absence due to his quarantining after his trip to Uzbekistan last week.  However, mainstream media reporters said they have seen no signs of military activity or other coup signals in major Chinese cities.  With Xi preparing to take a precedent-breaking third term in office at the Communist Party’s 20th National Congress next month, a coup in China would have major implications for global politics, economics, and financial markets.  We will continue to monitor the situation closely.

China-Currency Intervention:  Although the renminbi hasn’t depreciated nearly as steeply as the British pound, its recent weakness did prompt the People’s Bank of China to intervene today in the market by boosting reserve requirements for banks betting against the currency.  The onshore renminbi touched 7.1685 during early Asian trading hours today, hitting its lowest level since May 2020.

China-Hong Kong:  Beginning today, Hong Kong’s municipal government is ending its rule that visitors quarantine in a hotel for several days in order to stop imported COVID-19 infections.  The change marks a significant easing of one of the world’s toughest anti-pandemic regimes after more than 2½ years.

China-United States-Solomon Islands:  In his address to the UN General Assembly on Friday, Solomon Islands Prime Minister Sogavare parroted many of China’s complaints about the behavior of the U.S. and its allies in the Indo-Pacific region, including what he called their “intimidation” after he recently signed a security pact with China.  Among other worrisome feathers, that deal gave the Chinese military the right to use Solomon Islands’ ports.

United States-United Kingdom-Australia:  In a Friday statement marking the one-year anniversary of their AUKUS partnership, the Australian, British, and U.S. governments said that they have made “significant progress” toward Australia acquiring conventionally armed, nuclear-powered submarines.  The alliance aims to bolster Australia’s ability to defend itself and help its allies counter China’s growing military threat in the region.