Our Comment today opens with an update on the Russia-Ukraine war, in which Russia has announced a mobilization of its reserves and has made new threats to use nuclear weapons.  We next review a wide range of other international and U.S. developments with the potential to affect the financial markets today, including an overview of today’s interest-rate decision by the Federal Reserve.

Russia-Ukraine:  As Ukrainian forces continue to press their counteroffensives in their northeastern region around Kharkiv and in their southern region around Kherson, ethnic-Russian separatists in occupied areas yesterday announced they will hold referendums on annexing themselves to Russia.  The sham referendums are likely aimed at strengthening President Putin’s narrative that the war is all about “liberating” Ukraine and bringing the ethnic Russians there under Moscow’s protection.  After such a sop to Russian nationalism, Putin may hope to encourage more Russian men to volunteer for the war.  Indeed, in a speech defining the war as an existential struggle for Russia’s survival against what he described as a hostile West, Putin today announced a “partial mobilization” of Russia’s reserve forces.  Defense Minister Shoigu later said that the mobilization would eventually provide about 300,000 fresh troops for the armed forces, although he emphasized that the measure would not involve mass conscription.  Finally, in a further reflection of Russia’s continued manpower shortcomings, the Duma yesterday rushed into place a new law that dramatically increases penalties for desertion, refusing conscription orders, and insubordination. It also criminalizes voluntary surrender and makes surrender a crime punishable by ten years in prison.

European Union-China:  The European Union Chamber of Commerce in China issued a report saying EU companies are being forced to “reduce, localize, and silo” operations in China because of President Xi’s regulatory crackdowns on previously booming industries and his draconian Zero-COVID policies.

European Union-United States:  In another example of how many key countries allied to the U.S. are coalescing into a U.S.-led bloc, companies in Europe that make steel, fertilizer, and other feedstocks of economic activity are shifting operations to the U.S., attracted by more stable energy prices and muscular government support.  The trend is likely positive for U.S. investment and employment going forward.

Germany:  The federal government announced it will nationalize the country’s largest electric utility Uniper (UNPRF, 4.27), after it was pushed to the brink of insolvency by Russia’s cutoff of energy supplies and soaring prices for natural gas.  The move is a fine example of how war and crises can lead to long-lasting increases in government power over the economy.

United Kingdom:  To help its businesses weather surging energy prices touched off by the war in Ukraine, yesterday the government said it will cut the wholesale price of energy for businesses and public organizations by more than half this winter.

South Korea:  Even though the country’s currency is depreciating rapidly and is now at its lowest level against the dollar since 2009, the Bank of Korea has denied government suggestions that it will announce a currency swap arrangement with the Fed this week.  At 1,394.90 per dollar, the won is currently down 15.1% against the dollar so far this year, worse than any other major Asian currency except the Japanese yen. 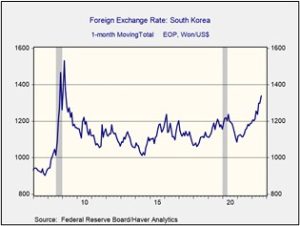 Haiti:  In yet another sign of how high global prices for food, energy, and other commodities are feeding political unrest in developing countries, a government plan to cut fuel subsidies has sparked large protests throughout Haiti.  Demonstrators across the country are calling on Prime Minister Ariel Henry to resign, saying he failed to address a spiraling economic and security crisis that has destabilized the Western Hemisphere’s poorest country.

U.S. Monetary Policy:  Today, Fed officials will wrap up their latest two-day policy meeting, with their interest-rate decision and updated economic projections due out at 2:00 pm ET.  Investors are broadly expecting that the officials will again hike their benchmark fed funds interest rate by an aggressive 75 bps.  We’ll also be watching with keen interest to see what their new economic and interest-rate forecasts say about the path of monetary policy going forward.

Hurricane Fiona:  After battering Puerto Rico earlier this week, Hurricane Fiona has now strengthened to a Category 4 storm and is moving north-northwest through the Caribbean Sea.  The hurricane is expected to slam into Bermuda later this week.