Our Comment today opens with an update on the Russia-Ukraine war, including a near miss yesterday when a Russian missile almost struck a Ukrainian nuclear power plant.  We next review a wide range of other international and U.S. developments with the potential to affect the financial markets today, including a preview of the Federal Reserve’s latest policymaking meeting which begins today.

Russia-Ukraine:  Ukrainian forces continue to consolidate and extend their gains in the northeastern region around Kharkiv and the southern area of operations near Kherson.  Although the gains have slowed since last week, Russian nationalist bloggers and influencers seem to be panicking to the point where they are urging the government to annex the ethnic-Russian provinces of Luhansk and Donetsk, despite the fact that Russian forces only control a portion of those two regions.

European Union:  In what could be a major political development for Europe, EU affairs ministers from across the bloc are meeting today in Brussels to discuss ways to scrap or limit the unanimity rule for foreign affairs.  Under that rule, any one EU country has a veto over the bloc’s foreign affairs initiatives, such as Hungary’s recent veto of tighter sanctions on Russia.

Sweden:  The Riksbank today hiked its benchmark short-term interest rate by a whopping 1.0%, marking its biggest rate rise in three decades and lifting the rate to 1.75%.  As with other major central banks, the Riksbank is belatedly fighting to get control over a surge in consumer prices.  Sweden’s August consumer price index was up 9.8% year-over-year. 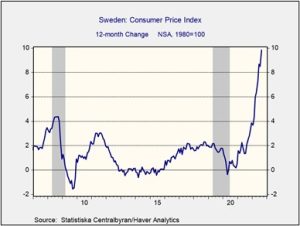 Iran:  Anti-government riots have broken out across the country in response to the death of a young woman in police custody who had been arrested for not wearing a headscarf as prescribed by the country’s “morality police.”  The government is cracking down hard on the protests, but the situation reveals increased unhappiness with Iran’s religious leaders and potential political instability in one of the world’s key oil producers.

China-Ecuador:  Yesterday, the government of Ecuador said it had secured a deal in which China Development Bank and the Export-Import Bank of China (Eximbank) will provide debt relief worth $1.4 billion and $1.8 billion, respectively. Consistent with China’s reluctance to write down any principal on its problem loans, the deals will extend the loans’ maturity, reduce interest rates, and slow amortization.

Brazil:  Ahead of the first round of presidential elections on October 2, supporters of conservative President Bolsonaro have murdered at least two prominent supporters of leftist Former President Lula da Silva, the frontrunner.  The Lula campaign has also been hit with bombings and other political violence.  The incidents raise concerns about broader clashes as the election nears, or if President Bolsonaro refuses to accept the results of the election.  Naturally, such destabilization would be negative for Brazilian equities.

Mexico:  An earthquake registering at least 7.6 on the Richter scale hit the southwestern state of Michoacán yesterday, killing at least one person and damaging several buildings.  So far, the quake doesn’t appear to have caused any significant damage to the country’s economy or financial markets.

United States-United Kingdom:  In an interview on her way to the United Nations General Assembly, British Prime Minister Truss admitted that a U.S.-U.K. free trade deal is not in the cards anytime soon.  The admission belies Brexit supporters’ insistence that a major benefit of the U.K. leaving the EU would the opportunity to strike a major deal with the U.S.  Without such a deal, Brexit will leave the U.K. with a much more difficult trade relationship with the EU, adding to the U.K.’s economic problems and probably weighing on its financial markets.

U.S. Monetary Policy:  Today, Fed officials begin their latest two-day policy meeting, with their interest-rate decision and updated economic projections due out on Wednesday afternoon.  Investors are broadly expecting that the officials will again hike their benchmark fed funds interest rate by an aggressive 75 bps. 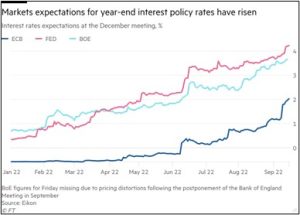 U.S. Labor Market:  Even though a major railroad strike was narrowly averted last week, workers emboldened by the tight labor market continue to make tough wage and benefit demands across industries.  It now appears that contract talks for 22,000 port workers on the West Coast have started to stall, raising the risk of a strike that would further impede international trade and snarl global supply chains.  Some isolated work stoppages have already occurred.

Those cost increases will probably exacerbate inflation, encourage the Fed to hike interest rates further, and weigh on corporate profits.  Any way you cut it, the increased labor activism is a threat to stock values going forward.